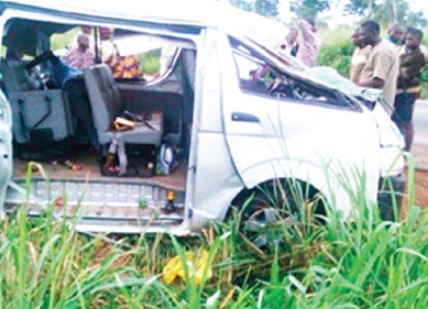 According to an eyewitness, a ‘Tokunbo’ vehicle which was driven by a military man was said to have overtaken a vehicle along the ever busy Epinmi-Isua-Abuja road.

The Police Area Commander for Akoko, Razak Rauf who was on a routine trip to some divisions in the area confirmed the accident and attributed it to recklessness.

A community leader and Chief Imam of Epinmi-Akoko,Alhaji Maliki Alimi lamented the incessant road carnage along the same route in recent time.

They reportedly evacuated the corpses to Ikare-Akoko Specialist hospital mortuary.

It was also confirmed that the drivers of the two vehicles survived but sustained various degrees of injuries and now receiving treatment in the hospital.

Continue Reading
You may also like...
Related Topics:ondo state news