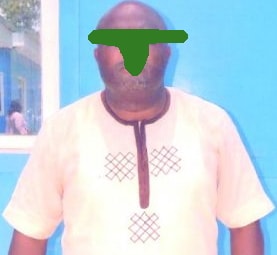 A man identified as Michael Akpan-Isaiah, was  Thursday remanded in prison custody by the Rivers State Chief Magistrates’ Court in Port Harcourt, for allegedly defiling his four daughters.

The minors are aged between two and 17 years.

41-year-old Isaiah, an indigene of Akwa Ibom State, allegedly committed the offence between April and May in Port Harcourt.

He was not allowed to take a plea on the three-count charge and was not represented by a lawyer.

Prosecutor Onyishi Joshua told the court that the accused committed an offence contrary to sections 358 and 218 of the Criminal Code, Cap 37, Vol. II, Laws of Rivers State of Nigeria, 1999.

Members of the state branch of Federation of International Women Lawyers (FIDA) were present at the sitting.

They announced appearance as watching brief on behalf of the victims’ mother.

The charge reads: “That you, Michael Akpan Isaiah, sometime in April, 2018 at Borokiri Sand Field, Port Harcourt, within the Port Harcourt Magisterial District, did have unlawful carnal knowledge of (name withheld) without her consent and thereby committed an offence punishable under Section 358 of the Criminal Code, Cap 37, Vol. II, Laws of Rivers State of Nigeria, 1999.

“That you, Michael Akpan Isaiah, sometime in May, 2018 at Borokiri Sand Field, Port Harcourt, within the Port Harcourt Magisterial District, did have unlawful carnal knowledge of (name withheld) aged seven years old and thereby committed an offence punishable under Section 218 of the Criminal Code, Cap 37, Vol. II, Laws of Rivers State of Nigeria, 1999.”

The accused admitted committing the crime, but claimed he was manipulated.

But a FIDA representative, Fortune Ada Ndah, dismissed the claims and told the court that he carried out the act in his right senses.

She alleged that the incest had been going on even before the two-year-old he also defiled was born.

“The accused has been forcefully sleeping with his daughters for the past three years,” Ndah added.

Chief Magistrate Zinnah Alikor described the act as an abomination, saying it was wicked and devilish.

She blamed the mother for encouraging incest by not having a close relationship with her children.

Alikor declined jurisdiction on the charge and ordered that the original case file be sent to the state Director of Public Prosecution (DPP) for advice.

She ordered the remand of the accused in prison custody and adjourned the matter sine dine.

Addressing reporters after the sitting, Ndah said: “Medical diagnosis conducted on the children showed they have been defiled.

“FIDA is not happy about this irresponsible act of a man to his daughters. We will ensure the matter is prosecuted to act as a deterrent to others.”

The victims’ mother said she reported to her in-laws when she first noticed the amorous relationship between her husband and their daughters, but lamented that no action was taken.

She alleged that her husband threatened and beat her and the children up anytime they complained.