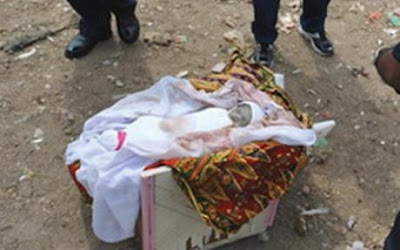 A man identified as Onyekachi Ekwelum has been arrested for allegedly selling his 6-month-old son to raise the money needed to process his Greece Visa.

According to the mother of the innocent baby boy, 20-yr-old Ozioma, she reported the matter to the police after her baby boy went missing.

She further revealed that her husband had longed to travel to Greece all his life.

According to Abia State Police Commissioner, Usman Abubakar, following the report by the missing baby’s mother, Police launched an investigation that led to the arrest of suspects who participated in selling the baby.

The Commissioner who expresses concern over spate of child trafficking said that on March 4 this year Mr Chidiebere Samuel of Ovungwu in IsialaNgwa south Local government area that his wife Odinaka Samuel connived with a nurse Monica Benjamin who delivered her baby girl and sold the child at N150, 000.

Describing such acts as inhuman, he said the suspects in the criminal transaction have been apprehended and charged to an Umuahia Magistrate court.

What a world! Father selling his own son to secure travel documents…..