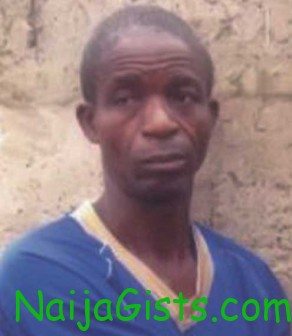 Elijah Olusesi, 45, who is a bricklayer by profession has been arrested in Ogun State, Nigeria for having carnal knowledge of his 14-year old daughter since she was 7. naijagists.com

We learnt the men of Oodua Peoples Congress, OPC laid ambush for him at Adeosun Street, Adiyan in Ifo LGA of Ogun State yesterday.

Elijah’s wife had earlier fled to the aforementioned community when she discovered her husband is sleeping with their little daughter.

Elijah Olusesi who has been evading arrest for over 2 weeks was caught on Wednesday night by OPC members.

He has been banished from the community after his heart-breaking confession of his engagement in the abominable act with his own daughter.

Elijah’s dirty secret was exposed when his daughter ran out naked in the middle of the night and was held by security men protecting the community.

After interrogation, she confessed she ran out naked because her father wanted to kill her with sex.

“I ran out when my father wanted to kill me with sex. He has been having sexual intercourse with me since I was seven years old and my mother knew about it. My mother and I ran away from him to come and hide here but we don’t know how he was able to trace us down here,” she reportedly told the guards.

Shade Olusesi, Eljah’s wife who is also a nursery school teacher in the neighbourhood, when queried by the community, said that when she caught her husband in the act with their daughter and reported the incident to her in-laws, they begged her.

She said that her husband equally begged her and promised that he will not repeat the shameful act again. She said she believed him, adding that to her utmost surprise, Elijah still continued the act with their daughter whenever she is not at home.

She added that her husband was sleeping with both of them simultaneously without her knowledge.

She said further that she stopped him from sleeping with her immediately she discovered he was having carnal knowledge of their daughter, adding that she had to run away with the girl from their former home to Adiyan in Ogun State.

She told the community that she did not know how her husband was able to trace them down to the remote village.

How can a normal man sleeps with his own 7-year old daughter till she clocks 14.

Abomination of the highest order Chai!