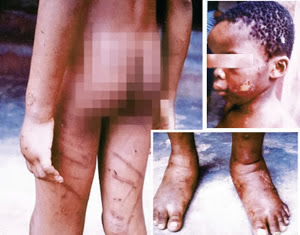 Ita was said to have paraded the little girl along the village streets naked, declaring that Goodness was responsible for his retrogression in the Police Force.

A source and relative of Ita, told our correspondent in Eket on Saturday, on the condition of anonymity, that the police sergeant tortured his daughter for several hours in an attempt to extract a confession of being a witch from her.

He said, “When he discovered that Goodness had passed out, Ita abandoned her, having hit her chest with the butt of his AK 47 Rifle.

“None of us could go close to Ita to rescue Goodness as he had threatened to shoot anyone that dared.

“I don’t see how a child of that age could become a clog in the wheel of her father’s progress in the Police Force. We need to tell each other the truth. Progress in one’s career depends on the efforts one has made academically.”

PUNCH Metro gathered that Ita had divorced Goodness’ mother some years back. He was said to have remarried almost immediately, leaving three children including Goodness with their grandmother.

A resident of the area, Okon Ekong, said that on July 28, 2013 when the children were on holiday, Ita had requested custody of them. He was said to be at his new station in Port Harcourt, Rivers State, at the time.

Ita’s former wife, Mrs. Anietie Ayamba, allegedly heeded his request and took the children to him. Ekong said that the children’s stepmother made life miserable for them.

He said, “It was during their stay in Port Hracourt, that their stepmother took the children to a Pentecostal church. Goodness was accused of witchcraft at the church. Her stepmother was told that Goodness was the person responsible for their father’s non-rising profile in the force.

“The father who was also in the church began to beat and kick Goodness in a bid to extract a confession about her witchcraft.”

When PUNCH Metro visited Immanuel Hospital, Eket, Eket LGA, on Saturday, where Goodness was taken to for medical attention, it was gathered that she had been admitted at the intensive care unit of the children’s ward.

Nurses at the hospital said Goodness’ condition was stable but that her bones and chest cavity had been badly damaged.

A group of women lawyers under the aegis of Federation of International Women Lawyers have said that they would do everything within their power to ensure that Ita was brought to justice.

The state director of the organisation, Mrs. Mary Udonsek, stated that the women would not continue to sit back and allow men maltreat their children on the guise of labelling them witches.

Ita, said to be working at Trans Amadi Police Station, Port Harcourt, Rivers State had allegedly not been to Ibiaku, Mkpat Enin LGA since the incident.

He said, “Messages have been sent across to police area commands in Oron and Ikot Ekpene so that Ita will not have any place to hide once he is in the state.”