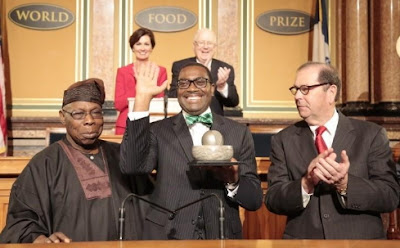 “The reward for work well done is the opportunity to do more.” – Jonas Salk

William Shakespeare said, “Men at some time are masters of their fates. The fault, dear Brutus, is not in our stars. But in ourselves, that we are underlings”. The reason why we are so impoverish in Africa can easily be traced to the faults in our systems. The way we reward ourselves has negatively tinkered with our values and sense of judgment. We are our own fault, we are our own nemesis, we are our own ‘punisher’, and we are the reason why we fail as a nation and continent!

The reason why corruption thrives in Africa is because we are rewarding it! Our leaders cannot stop corruption until they stop rewarding it. The logic is very simple: what you feed thrives and what you starve dies! We are feeding corruption with our faulty reward system. When we reward the wrong people, wrong perspective will continue to thrive.

When a system is not merit-based, then it is foundationally flawed. A merit based system will always put the right people in the right places. Most times, political appointments are given as a reward for political activity and loyalty instead of competency. While other nations of the world are rewarding excellence, results, honesty, effort, innovation and ideas, our own reward system stinks because we reward mediocrity, redundancy, sycophancy and eye-service.

I have observed an appalling depth of redundancy at the federal, state, and local government level. The level of truancy among civil servants has decimated national growth. Civil servants are paid monthly salaries without any proper recourse to monitoring and supervisions. The depth of decadence in the nation has grown to the height where we pay ‘ghosts’ (ghost workers) and even reward the ‘deads’ with federal appointments!

Recently, President Donald Trump of the United States frowned at the issuance of lottery Visas to foreigners by pushing vigorously for a merit-based immigration policy.

He has become very adamant with his “No More Lotteries” policy. He believes strongly that anybody that will enter the United States must earn it

. He said, “I, as President, want people coming into our Country who are going to help us become strong and great again, people coming in through a system based on MERIT. No more Lotteries!”

How do we reward novel initiatives? How do we reward hardwork and honesty? How do we reward patriotic services to the nation? Punctuality is gradually becoming a myth in Nigeria because it is seldom rewarded, or what can you say when a sitting Governor delayed a meeting held in the University of Ibadan by arriving very late (two hours after the commencement time!), and guess what happened when he eventually arrived with his entourage? He was given a resounding ovation on his arrival! We have so much trivialized punctuality to the extent that we have evolve another form of impunity called ‘Nigerian Time’.

Most times during convocations in tertiary institutions, you will hear of awards worth N800, N1000, N2000 and so on. What a paltry reward for intellectual ability! In the same country, you will hear of Gulder Ultimate Search where the Winner of every season is expected to go back home with about 10 million naira cash prize and an SUV! In Nigeria, we reward entertainment more than intellectual abilities.

Our National awards have been bastardize over the years, with some of the citizens having bouts of corruption allegation levelled against them being recipients! It is not very surprising that the late eminent writer, Chinua Achebe, declined the Nigerian national honour twice. He first refused the honour in 2004 and also in 2011. Achebe issued a statement to Nigerian press to say that he was turning down the award because “the reasons for rejecting the offer when it was first made have not been addressed let alone solved. It is inappropriate to offer it again to me”.

Some elected officials believe their exalted position should be a reward for members of their extended family as their appointment lists are studded with their relatives and folks, thereby throwing competency to the winds.

In the western world, they have designed reward systems that celebrate and uphold the virtues of excellence, commitment, dedication, and responsibility. There is an institutional fault in our reward system as we have often rewarded mediocrity over excellence. This is the core reason why corruption is more prevalent among Africans and blacks. Our corrupt leaders have meticulously designed systems to reward people with no intellectual value. We need to redesign a reward system to reward people that are solving problems and adding values. In Malaysia, teachers are paid more than any other worker because the government understands the value that teachers are adding to the communities. They believe strongly that teachers are mind and nation builders.

In Malaysia, you will see a PhD holder teaching in the primary school simply because teachers that are involved during the formative years of a child are rewarded more than university lecturers! It is appallingly true to know that the teachers that Malaysia is rewarding the most are often the most neglected in Nigeria! That is why Africa is gradually losing some of her intellectuals, nurses, teachers, and medical doctors to more rewarding foreign systems.

As a fall-out of our poor reward and value system, our leaders have become agents of mass corruption. Corruption has rendered our structural institutions impotent. I believe strongly that if we make necessary adjustment in our reward system and re-prioritize our values, corruption will die automatically. If anything is going to work in Nigeria, we must re-design a reward system that rewards the following:

EXCELLENCE: No one gets ahead by striving for mediocrity! Vince Lombardi said, “The quality of a person’s life is in direct proportion to their commitment to excellence, regardless of their chosen field of endeavor.”

HARD WORK: There is an old saying that hard work pays, but the Nigerian situation seems to work in reverse. Hard work beats talent when talent doesn’t work hard! When you live for a strong purpose, then hard work isn’t an option, it’s a necessity.  Bishop Oyedepo once said, “The only substitute for hard work is hard life”. We must encourage and reward the culture of hard work. Every organization must put in mechanisms to reward hard work.

RESULT: Results don’t lie! Nigerians need to understand that excuses don’t get results. Albert Einstein said, “Insanity is doing the same thing over and over again and expecting different results”. The reason why we seldom get result is because we rarely reward it. When result is not rewarded, people gradually become complacent.

HONESTY AND INTEGRITY: C.S Lewis said, “Integrity is doing the right thing, even when no one is watching”.  Honesty as they always say is the best policy. We must design a robust reward system to inspire acts of honesty and integrity. William Shakespeare said, “No legacy is as rich as honesty”.

PROBLEM SOLVING: I have said it several times that leaders that cannot solve problems are liabilities! Many of the people that are solving technology problems around the world are Nigerians. Nigeria’s bright minds are scattered all around Europe, Asia, United Kingdom, Canada, and South Africa. The best systems reward ideas, novel initiatives and problem-solving. The reason why we have been plagued with the issue of brain-drain in Nigeria is because we rarely reward professionalism and problem-solving.

PATRIOTIC CITIZENS: We must always find a way of rewarding patriotism. Many sportsmen and women have left the shores of the Nation for other counties because the system treated them with great disdain. Most of our athletes are winning laurels and Olympic gold medals for other counties while they were often neglected here or not even given a platform at all!

It is a basic truth that what we reward gets repeated. We need a vibrant rewarding system that rewards excellence, hardwork, results, Honesty and integrity, problem-solving, and patriotism.

A nation can’t just change; it is the people in the nation that needs to change. Let us stop rewarding the wrong people!

“When we reward the wrong people, wrong perspective will continue to thrive”~ Gbenga Adebambo

Stop Complaining About Your Country; Create Your Desired Environment
The Ten Things You Must Never Delegate