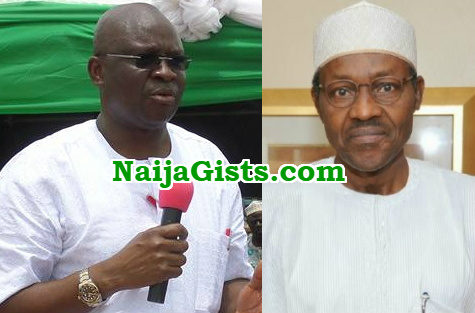 August 24, 2017 – Fayose: Buhari Can Never Be My Father Because My Mother Is Older Than Him, I Have No Apology For What I Said

Governor of Ekiti State, Ayodele Fayose has said he stands by all claims that the President Muhammadu Buhari was in coma on July 6, adding that he had no apology whatsoever for all he said.

Fayose told leaders of the Peoples’ Democratic Party (PDP) who visited him in Ado Ekiti that his agitation and revelation were responsible for the return of Buhari last Saturday.

“If not for our efforts Buhari wouldn’t have returned now. Buhari is sick and tired and even his physical appearance betrayed this. He needs to go home and rest. Today, they have cancelled the Federal Executive Council meeting. You cannot hide the truth forever, it will reveal itself someday. You cannot continue to deceive Nigerians.

“Every word that has come out of my mouth before the president returned, I have no apology for them. President Buhari was indeed in coma and one of those who visited him said his recovery is a miracle. That shows that he was indeed very sick.

“Let Buhari go back to Daura and rest. Don’t send him to early grave. Buhari is not old enough to be my father, my mother is older than Buhari, he cannot be my father, he can only be my uncle. I am close to 60. I stand by all I have said about the president. We are glad he is back, but don’t over flog him.

“I am not a sycophant and I stand to speak for Nigeria. Somebody must be able to speak on behalf of the poor masses. This was how they deceived us during the time of Yar’Adua. I am not an hypocrite and I will never be one. This country deserves a very healthy person. The office of the president is not for a sick man. The president is tired and should be allowed to resign and go and rest. I have said it several time, and without apologies. Everything I said when the president was away, I stand by them. The president actually went into coma and this was attested to by what one of the governors who visited him when he was abroad said that his recovery was a miracle. When somebody’s recovery is a miracle it simply means something very serious happened to the person.

“Since the president himself cannot disclose his health status and also the extent of his ailment, it apparently shows that there is so much to hide.

“You can’t be our president without us knowing what is happening to you. So, for me, the president went into coma July 6. Today, they can come back and organise rallies and all that; they attested to the fact the president recovered by miracle which we are glad about. We are happy th at he is back But when you at the president, you will see that he is emaciated, tired and weak.

“You don’t have to be president at all cost. When you are tired, go home. I don’t want to talk about 2019, but I want to tell you that Nigeria needs a president that is agile and strong. The job is too much for an individual that does not have what it takes. It is a common saying that health is wealth. Everything is about health. We wish him well and we want him to recover but the president should throw in the towel, resign and go home.

Regardless, Nasarawa State Governor, Umaru Tanko Almakura said Buhari presidency is the best thing to have happen to Nigeria.

The governor who stated this, yesterday, in Lafia during an interactive session with newsmen said the president’s stand on the state of the nation was timely, highly mature and the best decision for Nigeria irrespective of religious, tribal and political differences that abound in the country.

“I want to commend the president for the highly matured and fundamental speech. Nothing could be better than that for the country. People are talking about some superficial things, but if you study deeply the speech of the president, it stated that we have nowhere to call ours than this country.

“Like it or not, there is nothing you can do about the Buhari’s presidency, it has happened and we have agreed to come together to be an indivisible one united country. From 1914, when North and South were amalgamated, we became one country,” he said.

Eucharia Anunobi: My Only Child Has Died, He Has Gone To Heaven Waiting For Me To Join Him
Nollywood Stars Attend Mimi Orjiekwe Baby Naming & Dedication Ceremony [PHOTOS]