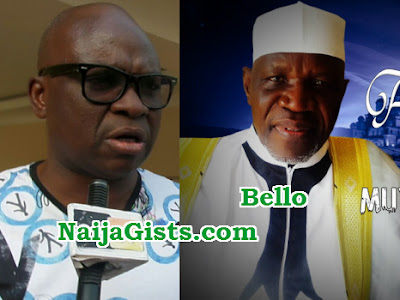 Nigeria’s most controversial governor, Ayodele Fayose threw caution to the wind last week when he allegedly insulted a popular Islamic scholar during the prayer conference and award ceremony organized by the Ansarudeen Muslim Society of Nigeria in Ekiti State.

A well known Islamic School, Sheik Muyideen Ajani Bello while advising the people of Ekiti state urged Fayose to be more cautious of his public utterances as the number one citizen of the state.

According to eyewitnesses at the event, the unsolicited advice apparently didn’t sit well with the alleged ‘gangsta’ governor who attempted to reply Sheik Bello.

Some elders around him reportedly pulled him back.

When Fayose appeared to be interrupting the speaker, his microphone was immediately disabled.

After the Governor was presented with a Muslim cap and given Muslim name (Abduljabar) by the AnsarUdeen Society President, Muyideen Bello was called upon just to pray for the governor.

“After offering prayers as directed, he went on to say that the governor should stop criticising Buhari and that if someone used jagidijagan (thuggery) to win election, he should be patience while in office. 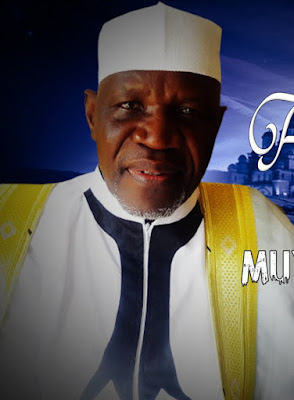 That the governors is only in charge of Ekiti State and should not be bothered with what Buhari is doing. After the cleric finished speaking, the governor said he needed to react and he was given the microphone to talk.”

In a harsh tone, Fayose said the gathering was not about politics and if he knew it was going to be politicised, he would have come there as a politician too.

“He said religious leaders should not bring themselves into the arena of politics and mixing religious with politics will defeat the purpose of gatherings like that.

The governor reportedly left the event in anger after telling 72-Year-old Muyideen Bello a piece of his mind.

However sources at the event said what the cleric said should not have bothered Fayose if he has respect for his elders as Muyideen Bello is even old enough to be his father.