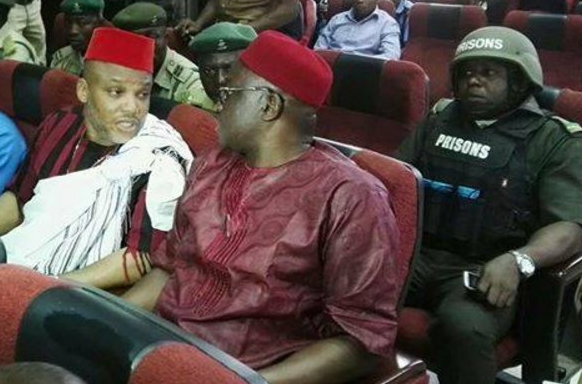 April 28, 2017 – Fayose: I’m Against Buhari Govt. Because APC Is Corrupt…Nigerians Are Hungry & Regretting

Ekiti State Man of the People, Ayodele Fayose was among those who went to Abuja to identify with Biafran activist Mazi Nnamdi Kanu on Tuesday where he showed his support for Biafra and his opposition to Buhari’s government.

In this chat with Daily sun, Fayose reveals why he has become an avid supporter of Biafra while highlighting his issues with Buhari’s government and the ruling party.

You were with the detained IPOB leader in court, what message were you trying to pass?

Well just for us as leaders to identify with the oppressed in our society, people at our level should rise up to make sure that the ordinary citizens of this country are not oppressed by the authorities that are supposed to be protecting them.
What Americans does most often is to keep pressure on government that does the wrong thing; we will continue to keep pressure on this administration not to prevent them from becoming dictators. Since we cannot carry gun, we must be able to identify with such people and let the whole world know that this is an oppressive move against the ordinary man.

What do you make of the stringent bail condition handed to him?

As a leader, I want to respect the judgments of our courts. Time will tell because I said in August last year that most of you promoting and packaging this government especially the media, you will all end up in the stomach of this man. I have said it severally, it is not personal, I have been very consistent about it before and after the election.

I really don’t want to go into the issues about the court because my identifying with Kanu is to put up a support in his defense for fairness and fair trial. On the issue of bail, he is entitled to make his position known to decide a way forward for himself.

As much as I love him, I believe that breaking up the country is not in our interest. However, it is his right and our right to agitate, people are still saying they want their own autonomy, they want to stand on their own and will set up partners to investigate to see their claim, call for referendum, call for public opinion about it, have a position about it, but not to incarcerate those agitating because you can’t stop agitation.

You are now being described as the main opposition to the Buhari government, are you comfortable with that tag?

It’s not as if I am the main opposition to Buhari, I am just a believer in fairness, wherever criminals belong, whoever they are, Muslims or Christians, it does not matter, crime is crime, wickedness is wickedness, brutality is brutality.

I will continue to say it as it is, because when we all keep quiet we will be taken one after the other and we will be destroyed by this administration. We must remember that Nigeria is greater than all of us, the power of the people is better than those of us in power.
One day we will all die whether it’s by oppression or sickness, so let me say I am not afraid of anything. If you don’t die, age will take everything away from you.

Look at our President, if you can see his heart, he wishes he was 42years old because that is the age and time one can be active. May God give him good health because it is in good health that Nigerians can benefit. When the President comes out every Friday, do we say we have a ceremonial President? Let us have a President valued for money and votes. You can’t deceive people forever because the truth hurts and the hunger in the land is ridiculous. The people are hungry and angry.

Why are you opposed to every step taken by this administration? Are you saying that there has never been anything good done by the government?

I will say I do not support the breakup of this country and at the same time, we should not be part of injustice and oppression. When court grants bail allow him to go home, that is all we are saying, so many tribes have married each other, so why should we break up but at the same time I think nobody, no matter how highly placed should take the life of a Nigerian. When you intimidate judges, asking where they got their money from, you are trying to force them to deliver judgment in a particular way. They (executive) will say they know you have some money and if you don’t do this like this, we will disgrace you and what would you expect a man who has built his career over time, to do?

Currently, the APC is doing everything to take life out of the PDP, it is a deliberate calculated attempt to promote internal rangling and destroy the party.

When Makarfi was pronounced by the lower court in Port-Harcourt as chairman of the party, they did not open the secretariat, when they gave judgment to Sheriff in the court of appeal; they went to open the secretariat. It is a hand of Jacob and the voice of Esau.

Let me say that these things are still in God’s calendar because God said he rules in the affairs of men, I am very sure we will get out of this. They should forget coming to rig in Ekiti state, I am saying it now because the road to Ekiti in 2018 will be an highway that nobody would be able to cross the road, it is the Lord’s day. We are mobilising, I want to tell APC very clearly that they have no place in Ekiti.

You have vowed that you will never accept Ali Modu Sheriff as PDP chairman, why take such an extreme position?

I have said it severally, Ali Modu Sheriff is not our chairman, he is an impostor that was why I regretted my initial support for him. And when I realized, I had to publicly come out and tell Nigerians that I am not with him anymore and till tomorrow I am not with him because there is nobody who will say he is a leader, yet does not want peace in the group he is leading, taking his party to court, fighting his own people, walking out of meetings.
I expect him to realize that destroying this party is not in his interest but that is the way he is being used before now. He was the one who killed the APP, ANPP and now he is starting again the PDP.

Why has it been so difficult to resolve the PDP crisis politically?

That is because the APC has taken over the crisis, the APC wants to kill the opposition, they want to make sure that even if they did not do well, there will be no opposition to challenge them. It is now an APC infested PDP to make sure PDP does not rise again. So it is not really an internal wrangling with PDP alone.

You have been critical of EFCC as regards some of the monies it said it recovered in recent times; why?

Let us talk holistically about the activities of the EFCC. EFCC is business for some people. EFCC is a tool to fight the opposition, largely, to suppress the voice of Nigerians, to cow the judiciary, to cow the press and all that. That is my take on it.

The CBN has announced that Nigeria will be out of recession in the next quarter, what is your take on that?

I disagree with them. What has changed? Except for their introduction of dollar to bring it down, but I don’t want to join issues with them, I have said my own.
The system is not functioning, the system is not working. We are only on a trial and error. A lot is wrong; except the president has courage to bring to justice, to put things beyond his personal relationship with some people, things will not work.

What message do you have for Nigerians?

I want to tell Nigerians that we should be of good courage, because these entire struggles for power are in God’s calendar for our Country, it will get better and God has a way of taking Nigerians through this kind of phase.

You know today Nigerians too are regretting. They are upset, people are hungry. They cannot meet their obligations anymore. The country is becoming a filling station.
Rather than admitting that you have no clue, you start saying you inherited problem government from the government of the past. During the government of the past, dollar was 200 Naira to 1 Dollar or 90Naira to 1 Dollar. What kills the dollar today, the corruption that is in the system now is worse than before.

Fayose forgot to tell Nigerians how all the dollars embezzled by Ministers in the immediate past administration contributed to the fall of Naira. Even experts agreed on this…. chai!!! Fayose na real ‘Ogboju’ man.

10 thoughts on “Fayose: I’m Against Buhari Govt. Because APC Is Corrupt…Nigerians Are Hungry & Regretting”