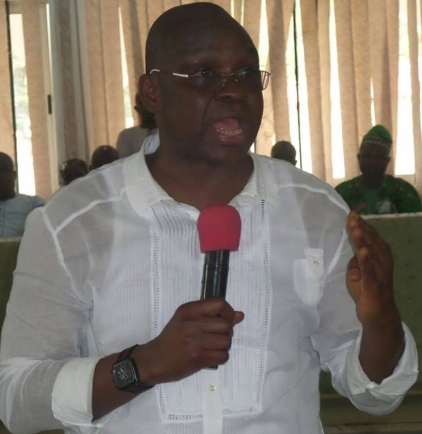 July 7, 2017 – Fayose To Nigerians: I Will Become Your President In 2019 By Divine Intervention

The Governor of Ekiti State, Ayodele Fayose, said on today he would become Nigeria’s president in 2019 through divine intervention.

He predicted that two events that would determine Nigeria’s future ahead of the 2019 presidential election would take place this month.

Fayose, who spoke while delivering the 13th convocation lecture of the Benson Idahosa University, Benin City, said something would give way for him to become the country’s president in 2019.

The Ekiti Governor, who spoke on the theme: “Education and Actualisation,” said he would continue to play politics until he becomes the country’s president.

He vowed never to become a member of the All Progressive Congress (APC), saying Nigerians especially the youths, were brainwashed through the social media to vote “for a President they never know.”

The governor said Nigeria’s greatest problem was not corruption but attitude of the leadership and the followers.

He accused the APC-led government of playing politics with the anti-corruption campaign, insisting that the “actual thieves are in Buhari’s government.”

Fayose said no meaningful achievements would be recorded in the educational sector if teachers were not placed on the driver’s seat.

“Teachers remain the only solution to the revival of education. Education is currently at its lowest ebb in Nigeria.

“If wishes were horses, beggars would ride”.

Goodluck to Fayose and his unrealistic ambition.