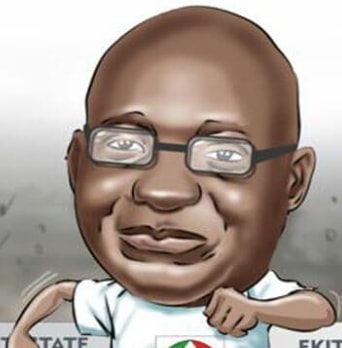 By the time you are reading this, the governorship election in Ekiti State would have been won and lost; in other words, the election would have become history. But not so some of the shenanigans; particularly the ones that trended until election eve on Friday. One of the badly scripted and poorly acted comedies was sent to me via WhatsApp on Thursday. I could not help but keep laughing like someone who has inhaled an overdose of laughing gas. Some readers might have seen it before now; but I have found it so evergreen that it would continue to elicit laughter whenever one comes across it. The more you read it, the more you crave for more.

But, beyond the comedy is the past that appeared to be haunting Governor Ayo Fayose of Ekiti State. As I used to say, it is someone who knows the havoc that spittle could be used for that spits on the floor and quickly rubs it with his foot. Fayose has every reason to be in pains now, physical or psychological, or even both. There is every reason why his Christian courage should fail him at this point of the struggle. He knows what they did with the governorship election in Ekiti in 2014. Just as darkness takes a flight when light arrives; so does fantasy when confronted by reality. A word is enough for the wise.

Meanwhile, enjoy Fayose’s comedy of the absurd. It is relevant whether ‘he won’ or ‘lost’ the election.

Fayose – Hello hello taniyen (who is that?)

Fayose – How far? Shey the video is still trending?

Fayose – Defects wo niyen? Did I not cry well? Even Wiki told me I cried well and Seconder even hugged me for acting so good. So, what the hell are you trying to say?

Leke – It’s not the cry, you did the cry part perfectly oga mi, but…

Fayose – So.. But what? What is it? I already ordered prompt payment to two television channels (names withheld) for live coverage. TVC turned down our request while the other one owned by that oyibo claiming Omo Niger insisted that he can’t do it for free, stating that he has not recovered all the money he spent during 2015 election.

Fayose – What about it? Was it not convincing enough?

Leke – Apparently we made a mistake connecting the arm sling to the neck collar. Instead of your shoulder, some medical doctors noticed it and that’s what’s trending now… And we were not able to produce any evidence that a police man slapped you. Oga, you could have sticked (stet) to original plan of the inhaling harmful toxic thrown at you by the police. We don’t know how you changed the story thereby making us look stupid in the eyes of Nigeria, oga.

Fayose – Nonsense, what’s the point in all this grammar?

Leke – It’s like this sir, there’s no way a broken hand would be supporting a broken neck and vice versa.

That’s where we made the mistake sir.

Fayose – Do we need to stage another one? Money is not the problem, Wiki and Atike are paying

Fayose – Leke are you there? Why the silent?

Fayose – Do we stage another one?