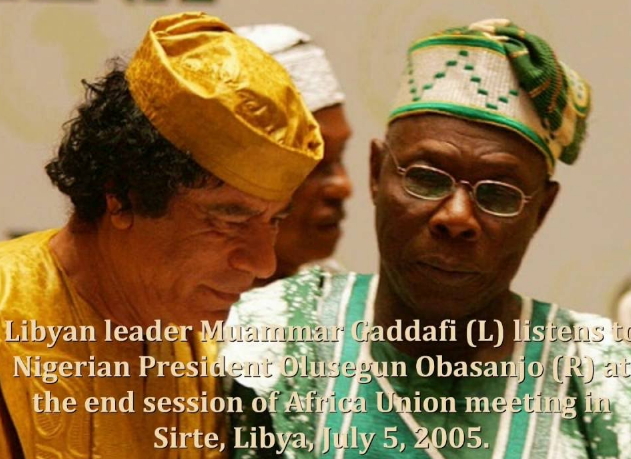 July 28, 2017 – Fayose Narrates How Obasanjo Kneels To Beg Gaddafi To Support His 3rd Term Bid, Says It Was A Shameful Scenario

Ekiti state governor Ayodele Fayose has revealed how Obasanjo used him to wreck Atiku’s  Presidential bid and that of PDP Chairman Ahmed Makarfi.

Speaking with ‘The Interview’, Fayose alleged that Obasanjo thwarted the chance of Makarfi becoming the Peoples Democratic Party (PDP) presidential candidate in 2007.

He said Makarfi was sidelined in favour of a “sick and stubbornly reluctant” Umaru Yar’Adua. The governor also explained his role in it as chairman of the presidential selection committee.

Fayose said in his naivety, Obasanjo used him to attack Orji Kalu, former Abia state governor and other political foes.

In a statement, Azu Ishiekwene, MD/editor-in-chief of The Interview, described the current edition as “a window on a dark and troubling past and a must read for any important political figure who has crossed Fayose’s path in the last 18 years.”

Fayose said the scale fell off his eyes when on a trip with Obasanjo to Tripoli, Libya, where Obasanjo had gone to ask Muammar Ghaddafi to support his third term bid, the former Libyan president treated Obasanjo “like a serf”. 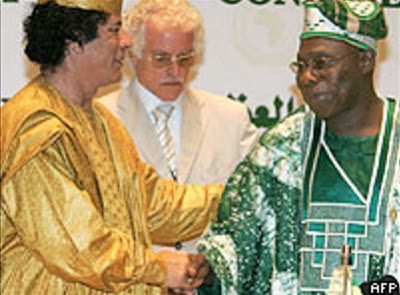 Recalling the encounter, he said, “It was such a pathetic scenario, so shameful. Obasanjo was speaking rapidly like a parrot. I was shocked beyond words. I never knew Obasanjo would be that humble.

“He was on one knee till the end of the conversation. Ghadaffi kept quiet and was just watching Obasanjo. When Obasanjo stopped rambling, Ghadaffi said, ‘Have you finished? Just know that I will not attend that meeting. I have other engagements.”

He also revealed how on two major occasions when he went to visit Abubakar at the height of Obasanjo’s third term bid, security details promptly reported him to the former president, even before he left the venue, leaving him feeling spooky and vulnerable.

On the Obasanjo-Atiku saga, Fayose said, “Obasanjo told me that when you capture a general and you don’t kill him, he’ll come back and kill you; that since Atiku tried to stop him and failed, he must pay for it. And he (Atiku) is still paying for it.”

Fayose also said he knew, as an insider at the time, that Obasanjo betrayed former Liberian president, Charles Taylor to induce US support for this third term bid, after promising Taylor safe haven in Nigeria.

He also spoke on his attempts to reach President Muhammadu Buhari directly; relationship with Kayode Fayemi, his predecessor, Bola Tinubu, national leader of the All Progressives (APC); and the futile attempt to discourage Peter Odili, former governor of Rivers, from accepting Obasanjo’s “dummy that he was heir apparent”.

Fayose was first elected governor in 2003 but could not complete his tenure as a result of his impeachment.

Angelina Jolie Reveals How She Went Into Menopause After Doctors Removed Her Ovaries
My Wife Was Gentle When We’re Dating, After Wedding She Became A Demon – Man Tells Court