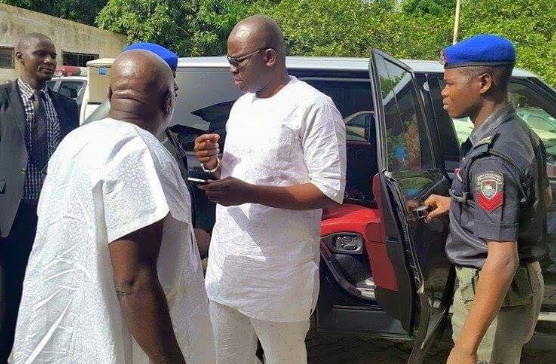 Governor Fayose has raised an alarm over plan by the EFCC to implicate him in the June 21, 2014 governorship election in the state.

During a press briefing in Abuja on Sunday, the controversial governor alleged that the Secretary to the Government of the Federation (SGF), Mr. Babachir Lawal and the Attorney General of Federation (AGF) and Minister of Justice, Abubakar Malami (SAN) were coordinating moves for his impeachment.

“Activities of these elements that are obviously afraid of facing another electoral defeat in 2018 are being coordinated through the office of the Secretary to the Government of the Federation (SGF), Mr. Babachir Lawal, and the Attorney General of the Federation.

“Certain top functionaries of the Ekiti State government and some important members of the Peoples Democratic Party (PDP) in Ekiti State, and some associates of mine, have now been pencilled down for arrest and indefinite detention by the EFCC under the guise of investigating the funds spent by the PDP on the June 21, 2014 governorship election and the presidential election,” the governor stated.

The SGF, however, denied the allegation and said only Ekiti people can decide Fayose’s fate. “It has never crossed my mind that he should be impeached. That is for the people of Ekiti State to decide,” he said in a text message to Daily Telegraph.