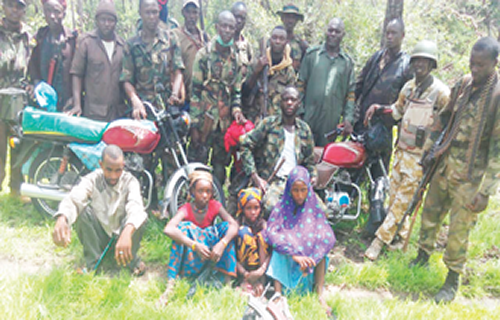 After an intelligence report from a Good Samaritan, Soldiers from 33 Artillery Brigade Bauchi moved into action and combed Ningi Forest where they engaged about 50 of the suspected kidnappers in a fierce battle.

3 of them were shot dead while others escaped with injuries.

Items recovered from them include 2 AK47 rifles, 4 cartridges, 2 motorcycles and 2 mobile phones.

Just as Sambisa forest is the most dreaded forest in Borno state, Ningi is also an evil forest where suspected militants carry out their nefarious activities in Bauchi.

Operation Flush Ningi is in full force to get rid of the terrorists before they inflict harms on innocent residents of Bauchi.