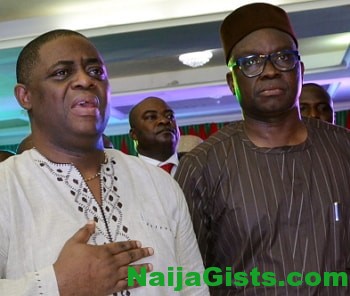 Close friend of Ekiti Governor Ayodele Fayose, Mr Fani Kayode today said that a suspicious spiritual bomb was behind the explosion of the governor’s N44million G-Wagon at Oshodi Oke area of Lagos on Tuesday.

In a tweet on the incident, the ex-aviation minister stated:

”They say my brother@GovAyoFayose’s official car caught fire and burnt to ashes whilst on the Oshodi expressway in Lagos. If those that threw the spiritual bomb that caused the fire expected him to be in the car when it exploded then they don’t know the God that Fayose serves!”