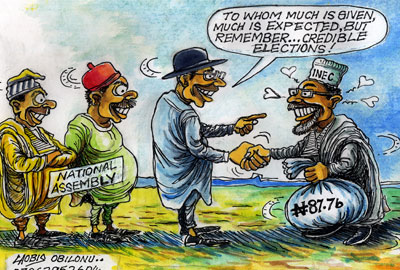 Jan 28, 2015 – February 14th Valentine’s Day 2015 Nigerian Presidential Election: Who Will Save The Day By Samuel Ekekere

LESS THAN A MONTH BEFORE HELL LET LOOSE

Tick, tick, the clock is ticking its way to February 14. The world is watching to see the outcome of Nigeria’s closest elections ever and perhaps one anticipated to turn out the most bloodiest. I am not a fan of any candidate or party. I am just an observer so I’d be as candid as I can be. On the streets of my city, like very other state capital city across Nigeria, campaigns have being ongoing. There have being huge interest on the candidates being presented by the PDP and APC the two strongest oppositions at the moment. It isn’t that there aren’t candidates from other parties. It’s just that at every level, both parties have shown tenacity and courage at tackling themselves head to head in what one will term the fiercest Nigerian political rivalry ever.

Reports of political unrest had reached the media within the last week, a precursor to what is expected to happen if things don’t go well in February. There are huge divisions on the choice of candidates as campaign supporters struggle to attract attention to their candidates. The mountainous tussle between opposition supporters battling for support for their candidate is extremely becoming ferocious as the elections approach steadily.

Even in families, siblings are differing strongly on their choice of candidate and they are saying so. For some, there is huge animosity growing. Friends are breaking up as each find solace under a political platform.

There is jittery in the PDP at the national level. President Goodluck has found it tough striving to arouse support from his babas at the top, the men who run the cabal. It’s really being a battle for him but with a tint of good luck, he could make headway. With Baba and IBB not on his side, he has quite a lot to worry. Members of the cabal are finding their way into APC.

If the numbers that appear at our underused stadiums across the land are anything to go by during this campaigning season, then one may clearly see the extent of politicking that is playing out amongst the big wigs. Even in the president’s own state, the crowd that cheered the General was unprecedented.

If you happen to come around the free readers association in your area, try getting close and listening to them. There is huge chance they will be talking about Buhari and Goodluck.

Massive plans are already on ground to rig the system by both parties. Plans have gone ahead and “guns” have been shared already. Training for the mission is seriously in top gear in the forest of Sambisa and the creeks of Delta. Boko Haram is becoming deadlier and we don’t know what may happen after the elections. MEND is adding their “wahala” and they are seriously threatening. They have given their voice to Buhari.

One can tell the direction this may be going to. Our religious clerics are not even helping matters. Recent unleashing by Pastor Tunde Bakare and his cronies has made matters worse. They’d be better off praying than making comments. What these politicians need at this time is warfare prayers. The politicians are preparing for evil, those who call themselves angels of light must prevail against them.

Just less than three weeks away, and truth will be known. The accusations and counter accusation from both parties of INEC working to favor one against the other is rife. If the facts offered by both sides are anyway true, then Professor JEGA has so much to answer Nigerians. He must not daint his fairly good work with one stain. That stain will speak more than the so much good he has done for the system.

True, INEC hasn’t done its job as thoroughly in recent times as it should. Most qualified Nigerian voters are still disenfranchised. PVCs haven’t being issued to a large number of Nigerians and there have being reports of officials asking for money before the cards are given.

Even cult groups are taking over the system in many places. I saw it with my own eyes. Cult groups are coming to light and they aren’t hiding their colors. They will have to do the dirty job so why hide. Their godfathers have assured them of the small lucre and that’s enough at least for a few bottles of alcoholic beverage and laps of chicken.

Staffs of companies owned by politicians are being owed while their ogas pay political touts to help them garner votes. Maybe the staffs won’t vote and their vote won’t be necessary for their ogas to win so he has to do the correct thing, send the money to those who will get the votes.

Students at the universities should be on the watch for invitations to collect their share of the national cake at the governors’ offices in their localities. The governors have decided they’d do a better job just a few days to the elections by sharing billions of naira to students while they owe civil servants. Just put your ears down or make often visits to the office of the governor in your state capital two days to Election Day. Money will walk on the streets.

For those who don’t know how to dance, its time you learnt some dancing steps. Campaign concerts are the rave of the town currently. Afterall musicians must have their share of the cake. It’s so free with all the biggest stars, there is no need thinking about your pocket. Government has decided to return back to the way it should be where everything is free. That’s how it should have being before now.

“Corpers” are smiling across the nation. They expect election extras. It’s great that the extras will arrive but even bigger extra is the fear that envelopes those who find themselves in trouble spots. They aren’t smiling. Government is doing all it can to keep the peace. At least for now, all is still well and Nigerians will love this status quo to remain or become increasingly better not worse. Police have being given new patrol vehicles. Strategies are being rehearsed and reengineered. In cities across the nation, security personnel are ensuring there is a security post at every major junction. The policemen have their eyes open against any uprising. Those planning the uprisings have also noticed.

The argument that is characterizing the political debate today is intertwined between faith, capacity, consistency, creativity, ethics as well as geopolitical alienations. In every state, we are faced with the challenge of ensuring that all ethnic and geopolitical groups have a place in the government. Political representations are offered along these archaic lines thus disenfranchising those who have capacity to lead and can deliver.

Again, health issues are being raised against the retired military stalwart and he has refuted the claims. No one knows who is telling us truth, but truth will certainly arrive like it did for Yaradua. The minds of Nigerians are being diverted from the real issues of discuss. Nigerians expect more and no one is telling us how that more will be achieved. Rather stones are being thrown on each side of the divide and Nigerians watch as spectators cheering each side where the stones that makes the greatest impact have being thrown from.

Nigerians should think bigger than they have being used to. We need to give up sentiments, forget long talks and demand from our leaders what we expect from them after they have being voted in. We don’t have to be carried away by jingles and adverts of hate being thrown everywhere. We have to demand quality representation. Let’s get to know what they are bringing to the table this early and what good reason they are offering us to vote them into power. Then we will be able to save face and act when those we vote in don’t perform.

At this time in our politics, we need more than knives and guns; we need a consensus of astute minds that have the capacity to propel this nation beyond today’s possibilities to a great future. We need a great future for us and our children.

Our political aspirants must tell us how they intend to take us there, how they  intend to save the day.