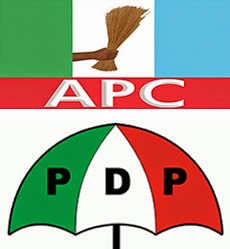 LORD OF THE RINGS BY SAMUEL UFOT EKEKERE

As we slowly find our way fully into 2015, the joy of celebrations by now has withered. The politics of the moment is in full swing. In just two months away we will know who the LORDS OF THE RINGS will be.

You must be glad to hear that as against former predictions of a revolutionary concoction that will see the grave end of this country, prophesies have come from renowned men of God like Adeboye, Kumuyi and TB Joshua to buttress the communion of beliefs that Nigeria should be #UnitedBeyond2015.

We had assumed that as the New Year began in first January, we might have a political holiday on that day but it never happened. Politicians seized the day to make some daring speeches hitting up the polity in the process. Sounds of bomb blast in certain parts of the north east did not help matters fueling the debate on the competencies of the incumbent president whose New Year speech was geared towards the crushing of the terror group Boko Haram.

If you’ve being on the internet in recent times, you’d probably have noticed that almost every dick and harry had a New Year speech. It seems making new year speeches has become fanciful and political too.

Khaki no be leather and the APC are preparing their assault. They have hired professional foreign coaches who are putting them through the punching process. PDP are becoming weary as they try to make do with the home grown super coaches they have always relied upon in the last few years. All the boxers are preparing in their special training camps because when they hit the rings in February, jaws must break and only one party will remain.

If the prophesies come true as expected, we have heard it wont be so easy a battle amongst the two heavy weights. Even the fans like us will be involve in this encapsulating festival of fire that once our candidates don’t win, we will go heaven and hell burning cars and houses to show our grievances.

INEC the referee is also preparing. There will also be serious side punches that will hit him so he has to practice with all the tenacity he can garner. He must be preparing hard as prophesies have foretold the impending sidekicks that will try to bring him down in the ring.

Did you hear the serious jab that came to the PDP camp from the APC over the New Year? Seriously it was no gain say. The APC is seriously not taking its training easy. They are sending words all over the internet of the PDP’s incapacity at defending Nigerians.

Last two weeks it was PDP talking about certificates and APC’S semi educated Presidential aspirant. So they said, not me. And then APC replied seriously with enough Christmas jabs. There will certainly be more jabs from both ends until the D day when they call it the big fight. If you never get your khaki, hurry before it increases cost in this New Year. You already are aware of the economic downgrade our country is suffering from. Hurry, get your khaki before it becomes hot cake. Igbo businessmen, here is a one million dollar business. For those aspiring bloggers, you can create a blog on how to make khaki materials.

Google will be certainly filled with answering such questions, because na khaki go be the uniform.

In this battle, anyhow na how. Whatever and however you go trying to win, it’s who wins that really matters after all. Have you not heard? Serious canvassing is already ongoing in churches and mosques.

The politicians have inflicted our religious grounds with political sickness. Religious clerics are taking sides fast fast. At least a pastor is running for vice presidential position, and he is our brother.

The incumbent president was in church on New Year day and he had so much to say. He is hearing so much and so must have a reply. I’m sure he never anticipated such strong opposition he is having now.

Even his friends before before are now taunting him with bad image. They are saying leave the ring for “you know who.” Well since prophesies have arrived of his winning however fierce the opposition, he should be more relaxed through this training and drilling process. If he had this kind of challenge before now, Nigeria should have changed. Thank you APC, lessons have being learnt.

The hand boys in Boko Haram are not even helping matters. The way they are going about this their wrestling is not making Nigerians happy. They are fighting the wrong people. If they could bomb Aso rock, it would have being appreciated. That’s the price though of the banter so they won’t go there. It’s for their ogas, the men to boys. That’s why the people’s voice will become increasingly powerful against them. When the people boo, God has spoken. Vaux populi est vaux Dieu.

This battle royal would indeed be a royal battle. Olamide, who has being offered a coaching role in the training process of the APC, has seriously “unleashed the beast.” You needed to be there to see the guerillas that had to deal with the vice president aspirant. Though his fans never liked his presence there, the man no send, provided that the beast in him was being unleashed, he has no problem with offending his numerous fans.

PDP and their contestants must be yearning for one big show of one musician too for some drilling. Maybe D’banj or MI may soon be called upon to offer their prowess and you will find the incumbent president there with all his aides. Politicians know this our musicians are very creative with unique skills and talents and they will just be good enough as tutors to learn some new dancing steps or slang. The PDP will call theirs “release the monster.” Oh! For now the tickets for entry into the battle dome are hard to get. There were actually long queues to get the permanent voters card by those who had the temporary one and most qualified voters who never had the voters card who had tried to register for one hit real rock. It is certain that most who would have voted have died through the last four years. The new qualified ones will have to wait outside the dome to watch inside proceedings on large screens or be told how it happened. I hope you understand.

If you are a tout, there is no wahala, you will stand by the gates. These warriors really need your cooperation and service. They are counting on you to ensure only the right supporters find their way into the dome. The seats are already tagged for the ogas at the top. They have to watch to know  which side they will have to shift to.

If you know what I see, mchewt.. This battle no go easy. I don’t expect the two oppositions to be looking nice on that day. Now, Jonathan is busy talking cool and throwing hands in plea to Nigerians, Buhari is busy smiling with kids and assuring them of a better Nigeria, Sambo is busy attending festivals and Osinbajo doesn’t attend church anymore, he attends shows. They are not showing off their plans except for some exceptional training trials they’ve been lashing at themselves in preparation for the Day.

When that day arrives, both sides will be sweating profusely, jaws will shift and hands will lose balance and we will yell. Ah, it will be hellish as opposing fans will raise arms against each other in support of their warriors.

Both fighters will be too weak to even finish the battle. As they both will lie on the ground, the referee will call the normal ten counts. One, two, three, four….nine. just then Buhari will rise. But before he does fully stand, Jonathan will receive some uncommon energy and rush to stand aright. INEC would be infuriated and call the game off for a refight. Fans won’t agree and they will go over the roads burning cars and vehicles to show their grievances.

Then the military machines will take over as on the roads all across Nigeria for a refight that will see G—become president.