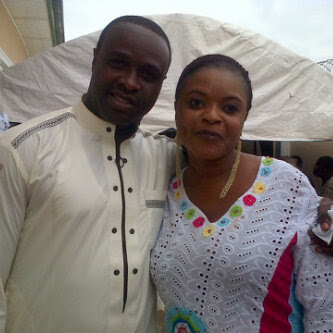 Nollywood Yoruba actor Femi Adebayo who was recently involved in a fraud allegation that started from an unverified source has come open to deny any involvement.

The story making round revealed that the actor collected 8 million naira from a woman he was dating in the United Kingdom to produce his movie.

The actor through his publicity Gbolahan Adetayo has denied the story.

Read their own version of the story below;

On Sunday, 3rd August 2013, a call was placed to Femi Adebayo by an unknown journalist who claimed to be a blogger. The blackmailer interrogated him on a purported allegation that he reportedly collected the sum of 8 million naira from a woman called Lara who is based outside the country. This has come as a shock to our client. The 8 million naira is said to be money for a movie production for her which Femi Adebayo was never involved in at any point till this moment. The blogger also alleged the unknown Lara is romantically linked to Femi – these claims Femi has said there is nothing of such nature.

Subsequently, another journalist who claimed to be an entertainment reporter also called Femi Adebayo on Thursday, 8th August 2013, at about 8pm in respect of the unpalatable allegation which he admitted was a fallacy. Not only that, the journalist threatened him over the story.

Sequel to this, the lawyer-turned-actor aka Jelili has debunked the allegations through his publicist, Mr. Gbolahan Adetayo that he has never done any business with anyone outside the country in relation to the mentioned claims:

” I have never collected any kobo from any woman outside the country to shoot a movie for her.

I have been shooting big-budget movies in the past which I sponsored from my personal purse or by my markerters. Just of recent, I shot 4 blockbuster movies and music videos – they are Sonto Alapata, Buga, Ila and Fuji Tabi Theatre together with other actors and music stars”.

He further disclosed that:” I have released 3 out of the 4 and the fourth one “Ila” will hit the shelves soonest. When I was called by a blogger-cum-journalist to ask me about the story, I told him there is nothing like that. If there is any evidence to prove it, let the person bluntly come out to show the world. I saw no evidence of truth in his purported claims. I have been in the industry now for a while, dishing out my things excellently. So I don’t know where the bad belles are cooking up their false news from”.

Femi Adebayo is an award-winning popular Yoruba actor who is highly sought-after in the industry. He has endeared himself to many with his skillful interpretation of roles. He is an actor who has continued to train upcoming actors at his Ibadan-based J-15 Drama School.

This is the first time the actor will experience a major fraud allegation.