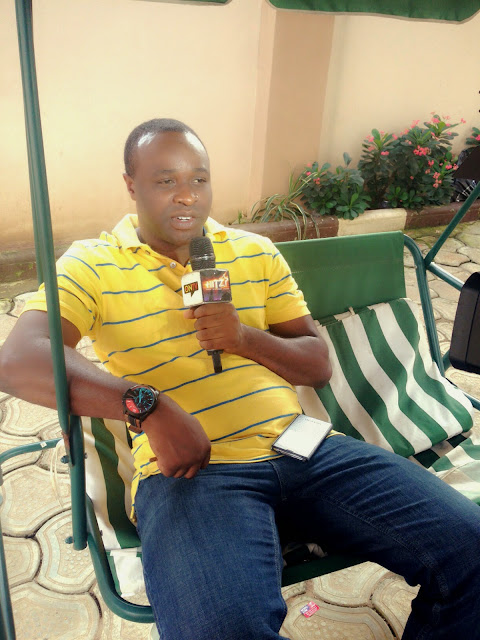 Veteran Nollywood actor Adebayo Salami’s son, Femi Adebayo, one of the most talked about actor in the Yoruba movie sector has acted meritoriously to move out from the shadow of his actor father.

In this latest interview with the Entertainer, Femi Adebayo addressed his rumoured romance with his colleague, Funke Akindele and talked about other issues.

Is having a backbone like your dad in the industry the ticket to the centre stage?

It is a yes and no answer. Yes in the sense that the moment I was able to climb the ladder to a particular stage, I was fully supported and managed by my backbone in the industry which is my father. I would also say no, because it wasn’t the fame that gave me the opportunity to get to the centre stage. I went for many auditioning and won several roles that actually led me to the top, but to say the truth my father’s influence helped me a lot.

Tell us the difference in your relation­ship with “Oga Bello” and Adebayo Salami?

It’s totally different. On set we are colleagues and father and son off set. Sincerely my father would not agree to play father and son role on set, because he believes every role needs to be interpreted well and real. Acting a father and son role would definitely call for series of actions like me shouting at him, slapping and pushing him which I wouldn’t want to do to a wonderful father in the sense to make our acting real. All the same, the most fantastic thing about my father is that he is approachable, got that listening ear, no matter how terrific the situation is. My mother is also tolerant.

So what would you have changed about the way you were raised?

Probably, I would have said the economy and the society at large which I believe would definitely have one or two roles to work on my parents to raise me in a particular way. I would have preferred to be raised in a better conducive environment, so I could be a butter boy.

How real are stories of romance at filming locations?

It is quite unfortunate that illiteracy among some of our fans tends to affect their reasoning ability, though not all of them. Sometimes I begin to wonder why people cook up such irritating ideas. That’s why we show a lot in the making of the movies at the end of our films. Sincerely actors and actresses are decent people, we are not fools.

Are you saying actors and actresses are saints?

Even if anything is going to happen, it must be something of mature minds, not the other way round. You may intend to like a colleague, not only in acting sector even in your own field, I believe nothing is stopping you so far both parties are mature. But have it at the back of your mind that actors and actresses are decent people.

Have you ever dated Funke Akindele?

Truly speaking, I have decided not to answer any question as regards Funke Akin­dele anymore. She is a female colleague, we most times work together to interpret roles and that’s all. I’m doing my job the way I love doing it. Obviously I have links with a number of actresses that are also committed and not only Funke Akindele.

So, how easy was it quitting law for acting?

I would say it’s a divine call. No doubt about the fact that you need to take some extra steps to excel in your field especially the moment you choose two different things which are acting and law. But so far it is God’s calling, then it will definitely be easy.

Don’t you think you would perform better interpreting the role of a lawyer?

The major challenge that I can recollect was in 1997, the time I wanted to partake in an English play, then, it was dominated by Igbo. If you were born Yoruba they would quickly get you out of the game, even if you performed well during auditioning. This prompted many Yoruba to change their names to bear English name but I can’t just change mine. I can’t try to be who I am not, so that alone made me concentrate more on Yoruba films. To God be the glory I’m doing it big, many of them even like acting Yoruba movies now that our culture brings us more stories every now and then.

So how stylish is Femi Adebayo?

Femi Adebayo is just very simple. I love to wear what suits me, I costume myself in most of my movies. I shop for new clothes every two weeks. Femi doesn’t need to go out of Nigeria to pick his choice, I settle for Nigerian made anytime I am home and buy things over there when I am out of the country. I like sky blue color of socks, listen to all kinds of music and to crown it, I love eating beans. (Smiles)