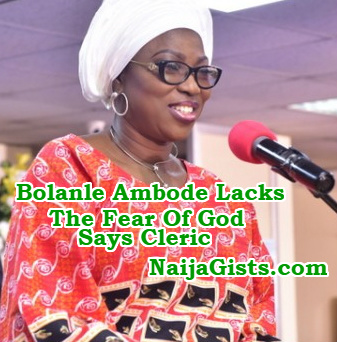 May 28, 2017 – Bolanle Ambode Is A Pastor At RCCG Church, She Lacks The Fear Of God For Sacking Venerable Femi Taiwo – Cleric

Femi Taiwo Sack: Bolanle Ambode Is A Pastor At RCCG Church, She Has Bad Attitude, We Prefer Fashola’s Wife  – Cleric 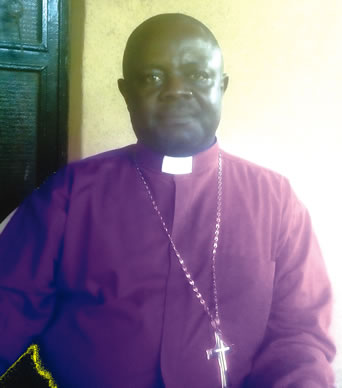 Has the church received any formal complaint against the Venerable?

That is where as a church we are angry with the government. If he is a serial offender as alleged, nothing stops them from reporting him to the church, that the person you seconded to the office here has a bad attitude and we would have called him to order. We have many others that we could have sent to the chapel. But we are very sure of him that was why we sent him. The government failed to inform us and for government now to have taken such a drastic step and tell him to leave (his official apartment) within 24 hours leaves much to be desired.

You mean the 24-hour ultimatum was truly stated in the sack letter?

I was here (in my office) when he (Venerable Taiwo) called me that they asked him to pack out within 24 hours and that he was even told that the governor’s wife would not like to hear that he was still being seen around. Then we started wondering what could have happened? Somebody that has a wife and kids, and you asked him to go within 24 hours? Where do you expect him to go?

This is very ungodly! It is a sacrilege for someone who happens to be a Christian. Even when Fashola (former Lagos State Governor) was there, despite being a Muslim, he never took such a decision. Now that the governor (Ambode) is a Christian, which we all fought for, he is the one taking ungodly decisions. We have written letters to CAN and CCN, including the Methodist Church where the Venerable Taiwo’s assistant came from, that if Mrs. Ambode, is trying to cause divide and rule among the Christians, she should go ahead. We are not afraid of anything.

We understand that Mrs. Ambode is also a pastor in the Redeemed Christian Church of God, let her go and ask the RCCG Pastor, Enoch Adeboye, whether what she did was the right thing to do to a minister of God. It is ungodly and very sad.

When the church heard that the sack was about anointing oil, what was the general reaction of the church?

Anointing oil is a personal thing. Nobody has the right or power to force anybody to take anointing oil. It is even ungodly to say a worshipper should take it by force. Even Holy Communion is voluntary; there is no protocol when it comes to that. When you are in the House of God, rich or poor, old or young, you are all equal before God. If Ambode will recall, anytime she comes for service, she will be the one to sit in the front and she has the right and privilege of going to the stage first if she is interested.

What did the Venerable tell you happened at the service that day?

I have tried to confirm from Taiwo what really happened on that Sunday and he said the service held as usual. There were three of them who stood to minister the anointing oil and few of them who wished to receive the oil came forward. Ambode’s wife later joined the queue. And she even participated in the thanksgiving service.

But why was she angry that day? The church members said she left in annoyance.

From my findings, her point of annoyance was that she was not recognised. She was not duly recognised and I asked that at what point was she expecting that recognition? I was told that Venerable Taiwo mounted the pulpit to deliver the sermon, she expected him to recognise and welcome her to the service. To some extent, I agree with her because the Bible says we should give honour to whom it is due.

Was that enough for a sacking?

That did not call for a sacking. The procedure they adopted was ungodly. If she felt offended because of recognition, there is a procedure. She could have called the chapel members and the management body and let them query him and ask why he didn’t recognise the governor’s wife. And then the management body would make their recommendation to the governing council. And the council will then forward their decision to the government. That is the way it should be done. But they didn’t do it.

Whatsoever it is, our own point is that the right procedure was not followed. Government has the right to employ and the right to sack. But if you are now sacking and asking the person to leave within 24 hours, that is too much.

As a church, we are demanding apology from the governor and the government of Lagos State. We demanded that we wanted a Christian governor. We came out en masse and supported the political ambition of Ambode. We told our members to go out and vote for him. Unfortunately, people have started mocking us.

What has happened is a sacrilege and Mr. Ambode should know that. We have been appreciating his efforts in Lagos. Why will he allow himself to get involved in such a trivial issue that can spoil his public image? You are the governor and the image of Lagos State and the father of all. When any report comes to you, you should dissect that report and know what steps and action to take.

Has CAN tried to mediate in this matter?

Yes, CAN and CCN have been trying to do some underground work to ensure that the matter did not get to this level. But now that it has got to this point, we have served them letters and I am sure they know what to do.

Will the church query the Venerable over the incident?

Yes, however, it might not be in the form of query. The church will do its findings over his activities over there and we will forward out findings to the centre. But so far from our findings, we have not found any fault in him. Some of the elders and chapel leaders are also angry over the sacking. They were not informed. He has not done anything to warrant what happened.

What has been the experience of the pastors of the church with Mrs. Ambode and former first ladies in Lagos State?

While I will not want to be too personal, as a church, we are very much at home with Dame Abimbola Fashola than with Mrs. Bolanle Ambode. Mrs. Fashola is a mother, very humble, knowledgeable and mature. She has a way of dealing with men, women, young, old, men of God of different cadres and she knows how to appreciate people. Many of these attributes are somehow lacking in Mrs Ambode. Maybe this is because of her tender age; she needs to acquire more experience.

What is the state of the Venerable and his family now?

I want to thank the members of the Chapel of Christ the Light. They have been very fantastic. They accommodated him and furnished the place he is staying now. His car got burnt where he parked it. If a car is parked in a government house and that car got burnt in the middle of the night like 2am, there is foul play. Even that alone, if government is very fair, they were supposed to set up a panel to investigate it. But that did not happen.

When this incident happened, it was these members that bought him another car so that he would not feel the impact of what happened. Even as a church, we are making plans to ensure he is not stranded.

He will not be without a ministry. We are going to give him a station very soon, if he is not called back. We just don’t want to rush it.

What will the church do if the government recalls him?

If government calls him back before he resumes at his new station, then we will need to sit down with them because this is a complete embarrassment to the church. Ambode, his wife, the state government, embarrassed and insulted the African Church. We must sort things out and give them our stand.

They may decide to recall him because of the tension that has arisen over the incident only to do something worse. These politicians cannot be predicted. Any politician that does not have the fear of God cannot be trusted. The embarrassment they caused us has never happened to any other denomination. Even during the military era this can never happen.

Why do you think some government officials don’t respect pastors and priests?

They lack the fear of God. They are conscious of position and money and with this, the society cannot move forward. Also, our religious leaders have messed themselves up because of money. They are patronising the politicians and they are making them to believe that their anointing is not real.

But I believe that any politician, who has the fear of God in him, even if any minister misbehaves, you are not the one to judge him. You should ensure you do your part. If Ambode or his wife knows the tenets of Christianity, they will not deal with Venerable Taiwo like that. They will know that this is a man of God.

They should have said have written to us, saying they don’t want to embarrass the church and we as a church would have handled it. We have a lot of other ministers across the state and the country. But they didn’t do that because there is no fear of God in them. They are not ready to submit to the Will and Word of God. Ego is killing us.

If not ego, why should Mrs. Ambode feel embarrassed that she was not called first to receive the anointing? But when ego takes the better part of any individual, that person will misbehave and if you tell him or her the truth, he or she will not agree.

Sola Fosudo: Nollywood Is Full Of Untrained Actors Producing Low Quality Movies
Why It Is Difficult For The Igbos To Be Granted Biafra And Ijaws Niger Delta Republic – By Perry Amadi