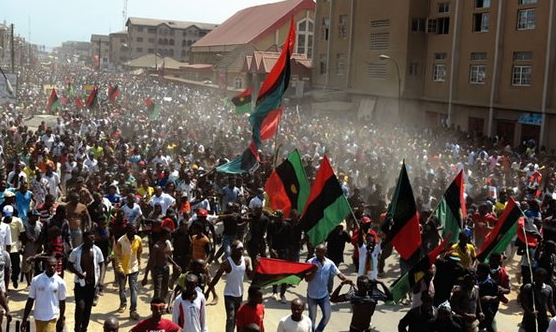 May 29, 2017 – Why It Is Difficult For The Igbos To Be Granted Biafra And Ijaws Niger Delta Republic – By Perry Amadi

So far it will be completely difficult for the IBOS to be granted BIAFRA and the same is applicable to the South South States especially the Ijaws clamouring for Niger Delta Republic because it will have an ethic outlook which the United Nations will not have an interest in.

In today’s world once you are racial you can’t go far because of globalization.

The Igbo cannot get BIAFRA and the same applies to the Ijaws.

Both must align themselves together in the struggle to gain independence from Nigeria.

It is a fact that other geopolitical zones in Nigeria refer to them as same people because they suffer the same politically, socially and economically in Nigeria.

At this point IPOB , MASSOB including the South South Coalition need to define the kind of structure the proposed BIAFRA FEDERATION or call it FEDERATED UNION OF BIAFRA will take.

Will the Proposed BIAFRA take the structure of UAE? or Will it adopt system of BRITAIN?
or that of the UNITED STATES OF AMERICA.

This point became very important because it is the major reason Nigeria is going backwards
Instead of progressing Nigeria is Retrogressing because it lacks a very definite structure.

Therefore the proposed Biafra must avoid this pitfalls that has stagnated Nigeria.

In order to avoid Suspicion amongst the ethic nationalities that will form BIAFRA, both sides must engage the Elites and Intelligence of both sides in this proposal which will later be enlarged as a treaty and later send it to all the ethnic nationalities of both the South East and South South for study after which they make their recommendation where necessary in that draft treaty before it will be signed.

It is important to note that admission into BIAFRA will not be by force rather it will be by choice through a referendom by each ethnic nationality.

Any ethic nationality that is not interested will not be included in the proposed BIAFRA FEDERATION or call it FEDERATED UNION of BIAFRA.

This proposal will amongst other things include.
1.System of Government(Parliamentary or Presidential)democracy.
2.Issue of Citizenship and Identity.
3.Resource Control by Regions or Provinces In Biafra Federation or Federated Union of Biafra. Provincial and Regional autonomy as well as Local Government autonomy.
with a proposal for annual Federal tax of 20% to the center to be paid by each region or province.
4.Security/Defence Structure as well as where will be the
proposed Captal of BIAFRA will it comprise the boundries of ABIA,AKWAIBOM,RIVERS,IMO,ANAMBRA AND DELTA STATES.?to give a sense of belonging to all the regions or provinces.
4.Judicial System.
5.Social and Cultural Integration.
6.Religion.
7.Economy and Financial System.
8.Education as a super Industry.
9.Industries ,commerce ,Infrastucture.
10.Immigration.
11.Taxation.
12.Customs and Exercise.
13.Health Insurance.
14.Social Security.
15.Membership with Ecowas and AU as well as United Nations.
16.International Trade.
17.Asset Sharing with the Nigerian State after succession and so many other topics
not included here.
18.Exit of a member of ethic Nationality or Region from Biafra.
The earlier the gathering takes place between the South South States and South East, the easier the realization of Biafra will come.

Outside the BIAFRA dream will die a natural death because presently the whole noise about BIAFRA is not defined with the type of Structure it will take and that is why so many Elites and Intelligentsia in the South East and South South States are indifferent in this BIAFRA struggle.

Pastor’ Sack: Bolanle Ambode, A Pastor At RCCG Church Has No Fear Of God – Cleric
Photos: Friends & Family Pray For Moji Olaiya As They Await Arrival Of Her Corpse In Nigeria