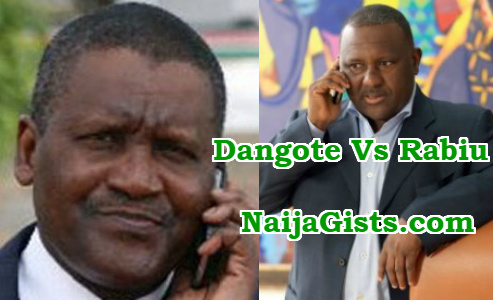 As fight intensifies between Dangote Group and Abdulsamad Rabiu-owned BUA Group over the mining rights for huge deposit of limestone located at Obuh community in Okpella, Etsako East Local Government Area of Edo State, the Federal Government, yesterday, ordered all the parties involved to vacate the site.

The measure is to avert a breakdown of law and order in the area in view of the growing tension among residents and security threats.

Governor Godwin Obaseki disclosed the Federal Government’s directive after a meeting with Okpella community leaders at the Government House in Benin, the Edo State capital.

The ownership of the mining site has been a subject of dispute between the leading cement manufacturers, Dangote Cement Plc. and BUA Cement. Obaseki noted that parties involved in the crisis are in court and, therefore, the Federal Government had decided that further mining in Obuh community be suspended to allow for a peaceful resolution of the crisis in court.

“Two people can’t lay claim to one asset, until the court decides the ownership or the federal supervising agency, the Ministry of Mines says otherwise, I am closing down that Obu mines with immediate effect because we believe there is globally acceptable way of determining ownership in a contentious matter without recourse to selfhelp,” Obaseki declared.

Addressing newsmen shortly after the meeting, Obaseki directed the state Commissioner of Police and the Army Brigade Commander in the state to halt further operations at the Obu mines with immediate effect.

The governor said severe sanctions await anyone that flouts the order. Obaseki said: “We are following the rule of law, there is a dispute, it is not unusual to have disputes over assets, but there are laid down methods to resolving disputes of this nature. “What we understand as a government is that there is dispute or claim between two parties over an existing mining right and the mining act of 2007 is quite clear, the Federal Ministry of Mines decides on how to award or issue leases.

“In this particular case, there are multiple claims and they have all gone to court. We have a letter from the Federal Ministry of Mines and Power instructing that the party currently mining that particular site should vacate pending the outcome of the decision in court.

So the position of Edo State government today is that court orders must be obeyed, Federal Government´s instruction should be obeyed; that mine should be shut until the outcome or the determination of the case in court¨ he explained. But the community leaders, after the meeting with Governor Obaseki, expressed worries over the development.

They accused the Federal Ministry of Mines and Solid Minerals of causing the crisis by giving licenses to both Dangote and BUA. The community leaders, in company of their legal counsel, urged both the Federal Government and the Edo State Government to urgently find peaceful resolution to the crisis. Also, counsel for Okpella community, Mr. Ayuba Giwa, said: “What we are saying in our response to the reference of the matter to the Presidency is that we blame the Federal Ministry of Mines and Solid Minerals that they ought to be more prudent in granting mineral licenses.

“We implore all parties to abide by the rule of law and the rule of law includes the fact that in 1994, Okpella took this matter to the Federal High Court in Benin and judgement was given in favour of Okpella.”

Giwa added: “When it dawned on us that the ministry was not complying with the judgement which was partly responsible for this debacle we are now; in 2014, Okpella went to the Federal High Court Benin.

So it is not just only BUA and Dangote that is in court, Okpella is also in court.” Spokesman for the Okpella Chiefs, Chief Moshood Aliu, had told the governor that they were in his office to declare their support for the state government’s effort at industrializing the state and for him to intervene in the dispute between Dangote Cement and BUA.

The community leaders stated that the youth are being incited against one another in a bid to enforce perceived right to ownership of the mines, a situation he said generated tension in the area. Meanwhile, BUA has said it awaits official communication from the Federal Government on the alleged shutting down of the mining site.

A statement from the firm’s Group Head, Corporate Communications, Otega Ogra, expressed surprise over the development. BUA said: “We heard of the alleged closing down of the Obu mines in Okpella, Edo State by the Governor of Edo State.

Whilst this remains in the territory of hearsay, our position on this matter remains very clear. Just as the Edo state Government said in its statement, this is an issue no state government has jurisdiction over as it is strictly a federal issue. It is however interesting to note that the mine under contention, ML2541, has been claimed repeatedly by the Ministry of Mines and Dangote to be in Okene, Kogi state.

Thus, we are curious and are at great loss as to why the Governor of Edo State is closing down a mine in Edo State which has been claimed by the other parties involved to be outside his state in Okene, Kogi State and which the purported ML2541 license also states clearly.

“This case remains in a competent court of jurisdiction which has ordered all parties – BUA, Dangote, the Ministry of Mines and others to maintain status quo and we will continue to abide by the dictates of the court as a responsible corporate citizen.

“We are however yet to receive some form of official communication asking us to close our mining sites ML18912 and ML18913 in Edo State, thus this alleged closing down report still remains in the territory of hearsay. We will respond accordingly when and if we get an official communication from the proper authorities.”

Continue Reading
You may also like...
Related Topics:dangote, mining, site