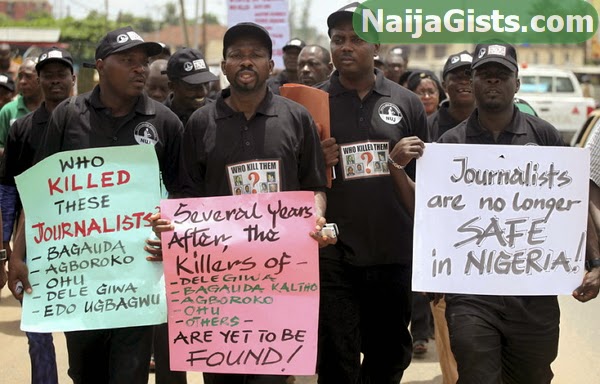 Nov 19, 2014 – Nigerian FG Steps Up Attack On Journalists, How Private Media Houses Are Being Silenced To Suppress The Truth As 2015 Elections Approaches

The history of news reporting and journalism whether paper, electronic and even the modern online is dated back to hundreds of years ago. Newspaper came to the lime light during the first European (world) war. Newspapers were used to promote propaganda and call on people to join the fight. In early 1940s when the second European (world) war started, there was a proliferation of media houses – radio, television and newspapers. Notably, the British BBC international including BBC Hausa was established during the European wars to help instigate Hausa people to Join Britain in defending it self against the Nazi’s.
In So many developed and developing countries, journalism (media) is the fourth arm of government. This is because, they link the government and the governed by reporting to them what is happening and how the government is handling their resources, security and even lives.

Unfortunately in Nigeria, private media and journalism has been established for close to 100 years now. But unfortunately, due to many years of military dictatorship, the private media houses were/have been Harassed, some even closed, some journalist killed etc, all with the motive to undermine their performance and silence them. Nigeria is among the worst counties of journalism in the world. Many journalists are ill treated in the course of doing their job. This is all due to corruption in the Nigerian system. According to transparency international, Nigeria is the 31 most corrupt country in the world.

Out of the over 1000 radio, television, theaters and newspapers in Nigeria, about the total of 60 percent of them belong to the government. This mostly radio and television stations of the government, are meant to enlighten the public, educate them, air their views among others. Unfortunately, these state owned media agencies have formed an alliance with the ruling party – in case of democracy and civilian rule, and the government when it is a military dictatorship. They broadcasts nothing but what is in the favor of the government. People are not allowed to say their views. And when they say it in such media’s, they will do what they called ” balancing” or “filtering”, they remove what they think the leader will not want to hear, living only what is in favor of the government. A typical example is Katsina state television. Upon all the three senators, 20 federal House member, General Buhari and other opposition stalwarts in the state, the state television is not airing their adverts and programs.

Even in the ruling PDP, a lot of those aspiring for various seats in the state are not allowed to hold their political gathering in the state, and the state owned media house do not air their programs. Abdullahi TATA is an example, his recent occasion in katsina was mired with police intimidation which resulted into burning down of the famous katsina polo ground.

For state owned media houses to be respected in Nigeria. There is the need for them to remain neutral and free and opened to the people.

It is high time the FG stop these unwarranted attacks on journalists doing their jobs and allow State-owned media house to air their views without limitation or harrassments.

Continue Reading
You may also like...
Related Topics:attacks, journalists, nigeria