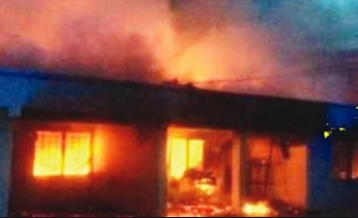 Lagos State Fire officials said a young girl was burnt to death during night vigil in a church in Egbeda area of Lagos State yesterday.

LSFS Director, Fadipe said the incident occurred around 2am at the main auditorium of Faith Revival Apostolic Church in Egbeda.

“We met the fire raging when we arrived. It was after the fire was put out that we discovered the 6-year-old girl’s burnt body in one of the rooms.

“The church authority was yet to ascertain the cause of the fire. We finally put out the fire at about 5 a. m,” – he said.

Some officials of the church have been arrested.