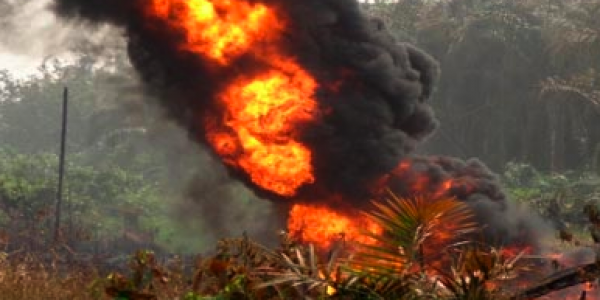 The National Emergency Management Agency (NEMA) on Sunday confirmed a fire incident on the pipeline network of the Nigerian National Petroleum Corporation (NNPC) in Ijegun area of Lagos State.

Mr lbrahim Farinloye, SouthWest, NEMA spokesman, however, told the News Agency of Nigeria (NAN) on telephone that nobody died in the incident.

Farinloye said the explosion was as a result of underground spillage through previous points of vandalism, and that there was no fresh act of destruction to the facility.

The Director of Lagos Fire Service, Mr Rasaq Fadipe, also told journalists on telephone that the explosion at Ijegun was reported to have occurred at around 7.15 am on Saturday.

According to Fadipe, several fire incidents occurred at the weekend in the state and the agency responded appropriately.