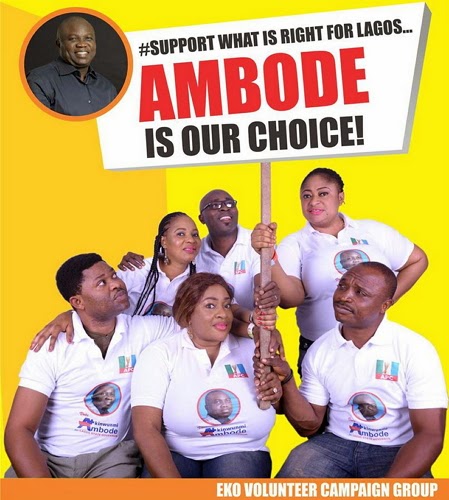 In a recent FB posting, he called out some politicians planning to hijack Lagos state and warned Lagosians to vote wisely in the upcoming elections.

Fellow Lagosians,
Would you ever vote for the following character of politicians to hijack your state and rule you?
Ayodele Fayose; Musiliu Obanikoro, Edwin Clark; Mohammed Abacha; Bode George; Adeseye Ogunlewe; Buruji Kashamu; Asari Dokubo; Iyiola Omisore; Diepriye Alamisheghia; Tompolo; Boyloaf ; Stella Oduah; Gbenga Daniel; dieziani, Lucky Igbinedion, patience Good luck Jonathan, Jonathan and a host of other politicians of questionable character and personalities.
If Jimi Agbaje becomes the governor, they simply become our rulers in Lagos!
Obviously, it is not only Jimi that will rule. He is definitely going to be ruling under the influence of his party men; PDP policies and their political orientation.
PLEASE, DO NOT VOTE TO DRAG LAGOS BACK TO LAGOS OF THE PAST! The future of Lagos is in your thumb!
PDP WILL MESS UP LAGOS!
PDP NOT OKAY FOR LAGOS!!
Lagos does not need any change. What Lagos needs is more SANITY, PEACE, progress, growth and development. These men will hijack Lagos and run it down.
BE WARNED! Eko o tun ba Je mon o!
– Concerned Lagosians for the Continuity of Good Governance in Lagos (CL-CGGL). Pls share to educate others.”

Ambode has employed the services of celebrities to take his change campaign across Lagos.