In an article titled ‘CRY MY BELOVED COUNTRY NIGERIA!’, The President of Actors Guild of Nigeria, Ms Fiberesima Ibinabo expresses displeasure over the frequent plane disaster that is currently plaguing the Nigerian aviation sector. 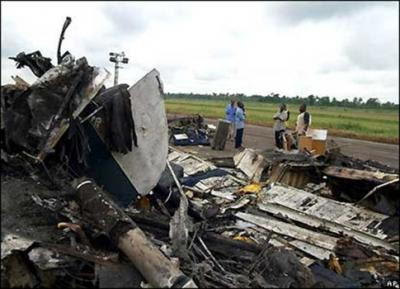 Read her article below;

I am Angry, outraged, pained. I will now be verbal and outspoken. I will continue to pray because HE is all I have. My God, but HE has given me the strength and Grace to make a change. I won’t stay mute, and watch my country grieve again!

We, as a nation, must commiserate with families of the victims of the latest air mishap in Lagos.  Our sincere condolences must go to them.

The call for the resignation of the Minister of Aviation in some quarters is very annoying, irritating, stupid and, an advertisement of, not only, the ignorance of the callers but also their level of insensitivity and wickedness! In as much as government has a duty to ensure that we have safe skies, it is not every accident that should be blamed on the government.

The Minister of Aviation, Princess Stella Oduah, is the best Aviation Minister ever to handle that ministry since our independence. It is, in fact, a monumental disservice to decency to be comparing her distinctive strides and achievements to those of her predecessors because those ones never performed.

It is true that accidents do occur. It is equally true that accidents sometimes occur even when the strictest of safety practices are observed. However, it is an indisputable truth that some others occur as a result of deliberate not-so-good avoidable practices. To the latter, you can pin almost all the air accidents that have occurred in Nigeria.

We all know that air accidents do occur even in the most technologically advanced nations of the world. However, we also know that in the case of Nigeria, some of these airlines indulge in practices that are at parallel with the demands of aviation safety.

A lot has been said about the ages of aircraft that ply the Nigerian skies. It is very pertinent to point out that the age of an airplane has nothing to do with its airworthiness. What matters is the airworthiness of every aircraft irrespective of its age. The biggest airlines in the world still have in their fleets aircraft manufactured in 1968! Delta Airlines in the US still flies their DC-9s. Dana was, and is still, being crucified for using MD 83 but these planes are the mainstay of some big carriers in the US. Fifty year old planes are still flying all over the world by the big airlines. So the problem in Nigeria is maintenance and pilot errors.

The Air France that crashed off the Brazilian coast was barely a year old. The crashed Kenyan Airways B737-800 was four months old! History is replete with these examples of crashed very new planes. One would rather fly a well maintained 48year old plane than be found in a 5years old plane whose due maintenances are not being observed.

Airworthiness is not unlinked to aircraft maintenance. This is where the problem is with the Nigerian airlines. The government has been doing everything possible, within its capacity, to improve aviation in Nigeria and, of course, safe skies for Nigerians. The present government has even gone a step further to remove import duties on the acquisition of aircraft and aircraft spare parts so as to help the airlines cut costs and invest more on maintenance. However, it is doubtful if these airlines are taking the issue of maintenance very seriously.

The Nigerian Civil Aviation Authority -NCAA is the agency responsible for oversight functions on the airlines in Nigeria. Blame games must take back seats now. Let us ask questions and proffer solutions.

Does the NCAA know who maintained the Associated Airline’s fleet and of course, who signed off the crashed airplane? Those engineers must have questions to answer and if found responsible, must be dealt with. Their licences must be revoked.

If it is true that the aircraft had, prior to the ill-fated flight, been parked for several months due to faulty engines, who then repaired or overhauled the engines?  How many hours of test flight were conducted before putting it out for commercial operations? Did NCAA certify the aircraft airworthy before this flight? These questions and their answers are not geared towards vindictive tendencies but to help address issues of safe operations.

NCAA must begin to ask questions about who maintains the diverse fleet of these airlines. It is the duty of the NCAA to ensure that every airline in Nigeria engages the services of the best MROs or highly qualified and experienced engineers in the world to run their maintenance. MRO means Maintenance, Repair and Overhaul company.

The NCAA should also carry out periodic audit of the airworthiness of all aircraft operating in Nigeria. Transparent severe Sanctions must be meted out to any airline found wanting to this end.

Again, to carry out this critical function very adequately and to achieve the expected outcomes, the NCAA should be funded to acquire the services of qualified independent assessors to carry out this periodic audit. Such assessor companies stake their names in the reports they release of their respective findings. An assessor is blacklisted if anything untoward happens in an airline it has given an all clear. They would do unfettered good jobs of this in other to remain in business. This would go a long way to ensure airworthy equipment in the industry.

Most crashes are as a result of pilot errors also.  Airlines must be prevented from giving command so easily to pilots whose experiences and expertise are doubtful. Pilots must be made to attend refresher training sessions in world acclaimed training facilities.

Most importantly, any airline that is found to be wanting in these areas should have its Licence and AOC revoked. The directors or the owners of such an airline must never be allowed to operate an airline again, either in their previous name or in a new name. They must never come back in a new name.

Besides auditing the engineering and maintenance departments of these airlines, the NCAA must also force all the existing airlines and the ones planning to join the business to show proof of adequate dedicated funds meant for fleet maintenance.

Maintenance is key. Government, on its part, should make it mandatory for every airline to have a maintenance hangar and go a step further to provide the airlines lands at the airports to build such hangars.

With these solutions implemented, the issue of air crashes would soon be forgotten in Nigeria. God bless our Nation.