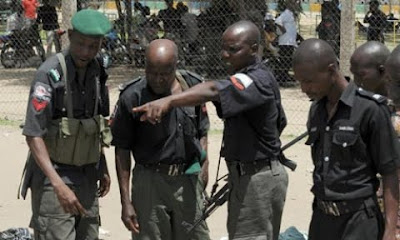 Some gunmen suspected to be armed robbers on Tuesday killed three policemen in Lagos, the commercial capital of Nigeria.

The Commissioner of Police in the state, Mr Umar Manko, who confirmed the development said that the policemen were shot from behind while in a moving patrol vehicle.

Manko said that the suspects, three of whom were dressed in caftan, took advantage of a downpour to hit the policemen who were on legitimate duty around the Ijora-Olopa area of Lagos.

The commissioner said that five policemen were in the vehicle when the suspects, who were on motorcycle, attacked them.

Manko said that three of the policemen died on the spot while the fourth sustained injuries with the driver, escaping unhurt.

The commissioner, however, said that he could not immediately give details on how the incident happened because he was yet to be briefed.

He said the policemen were attached to the Area ‘C’ Police Command in Surulere, adding that investigation had commenced with a view to fishing out the suspects. [PM News]