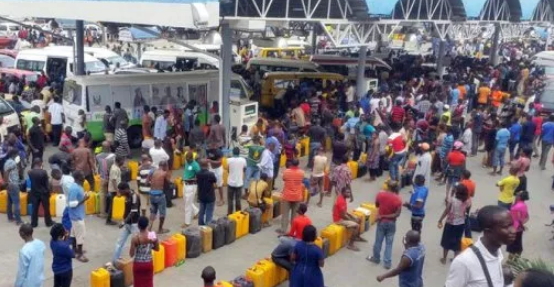 By now, Nigerians are already used to the antics of their governments, past and present. First, it always starts as a fuel hike rumour, oil sector unions threaten to down tools, queues at filling stations begin to emerge, and soon they stretch beyond sight, become unwinding, unwieldy and chaotic.

Motorists suffer in the hot sun and cold night; exhausted and weary, they are ready to buy fuel at a higher cost with less torture. Meanwhile at the black market, which is in the open space, fuel is available at over 100 percent above the approved price.

When it gets to this crescendo, a semblance of explanation begins to filter in from managers of our oil resources and governments making excuses for the woes and offering palliatives and soothing explanations: It is panic buying, they say. Silly excuse. Do people go into panic buying of a product that is available? It is the work of saboteurs and hoarders. Rubbish!

Do you hoard what is readily available? What’s the essence of a government that cannot contain saboteurs in and out of the system? It is the greedy marketers and the cartel that control the sector who want to embarrass government. Deal with it please.

All these and more are reasons why Nigerians cut shut the previous government’s 60 year-rule ambition to 16. Sadly, the story has not changed. Buck-passing has been added to the story line. When the filling stations dry up and citizens are angry, no person in government takes responsibility. Perhaps they are at their wits end. Time it was when this government enjoyed so much goodwill; and its words were gospel. So when the fuel price was increased in May last year, not much dissenting whimper was heard, even from those who make a living out of critiques and criticisms.

The minister of state for petroleum, Ibe Kachikwu said, with the new price regime, it is expected there would be “improved supply and competition will eventually drive down pump prices…leading to increased product availability…investments in refineries…prevent diversion of petroleum products and set a stable environment for the downstream sector”. In another development, Vice President Yemi Osinbajo in August last year said “Buhari’s administration has saved N1.4 trillion by not paying subsidy on fuel”, while Minister Lai Muhammed added for effect: “Those who accused this administration of propaganda and lies in the fuel supply sector did not tell Nigerians that whereas they paid between N800 billion and 1.3 trillion naira as subsidy yearly in their time, without making the products available even at regulated price, this administration is not paying any subsidy, yet all products are currently available at competitive prices and fuel queues are now history.” Now that the cookies have crumbled, all of them are maintaining sordid silence on the issue of subsidy, import-dependent deregulation, and the building of new and domestic refineries to help with domestic consumption.

The story this time is that there is import-price imbalance. According to the NNPC GMD, Maikanti Baru, the scarcity is as a result of the landing cost which is now put at N171, while government’s approved price ‘remains intact’. Baru can tell that to the marines. How can price be intact when petrol stations are diverting the product to the black market to make up for the difference..?

For decades the livewire of the economy (oil) has been in perpetual flux. When this latest cycle of fuel crisis started, the social media, which had been of tremendous advantage to the emergence of this government, went alive again, this time not to support, but to castigate it for having no answer to a recurring menace they were voted in to fix once and for all. All the platforms were abuzz, questioning the government’s sincerity, with commentators coming hard on the Buhari government which seems to have derailed from the utopia it promised Nigeria.

According to Aljazeera, in less than 24 hours, there were about 80,000 tweets and retweets, most of which upbraided the government for not being different from the previous ones, and the opposition for failing to seize the moment. This is the third time the nation will experience fuel scarcity under President Buhari. Nigeria produces about 2.4 million barrels per day, and is the biggest economy in Africa. Yet none of those countries less endowed than us is as troubled and challenged. The reasons are not far-fetched — good governance, capacity, transparency, accountability and the government having a sense of responsibility to the citizenry, while the people remain collectively undivided by party, religious and regional considerations in their demands.

The story this time is that there is import-price imbalance. According to the NNPC GMD, Maikanti Baru, the scarcity is as a result of the landing cost which is now put at N171, while government’s approved price ‘remains intact’. Baru can tell that to the marines. How can price be intact when petrol stations are diverting the product to the black market to make up for the difference and motorists are made to buy at N200 per litre? Who is paying the 26 naira difference in landing cost? Are they not indirectly telling us that N145 is no longer sustainable? Is this is not subsidy by another name?

They say vessels laden with the refined products are discharging at the sea ports. How long does it take to discharge products to get to the consumers? The Deport Petroleum and Products Marketers Association (DAPPMA), in a statement, revealed thus: “It is on record that any time NNPC assumes the role of sole importer, there are issues of distribution, because it is marketers who own 80% of the functional receptive facilities and retail outlets in Nigeria.

“While we cannot confirm or dispute NNPC’s claim of having sufficient product stock, we can confirm that the products are not in our tanks and as such cannot be distributed. If the products are offshore, then surely it cannot be considered to be available to Nigerians”.

Indeed, government seems to be at crossroads over refineries – to build refineries or to remain import dependent? In a serious country, the choice is very clear but with Nigeria, the choice is hazy, wrapped up in secrecy. What we need and what was sold to Nigerians as a campaign promise are holistic reforms to guarantee seamless flow with transparency and accountability.

Again we have been through these deceptions over and over. For decades politicians have made the building of refineries a campaign issue. I remember how the previous government promised to build a green refinery in Kogi State, and the people started fighting themselves over where it should be located. That’s a story for another day. This regime promised modular refineries. Indeed in all these, the stories have never added up and we are back to the old sing-song. The only difference is that while the previous government lacked tact and diplomacy in inflicting pains on the citizens, this government has the power of rhetoric, propaganda and enormous goodwill to booth, to deceive unsuspecting Nigerians.

So, as long as we do not refine locally and depend on importation, and as long as the government cannot come clean on deregulation and subsidy, we will continue to experience intermittent fuel scarcity. Indeed, government seems to be at crossroads over refineries – to build refineries or to remain import dependent? In a serious country, the choice is very clear but with Nigeria, the choice is hazy, wrapped up in secrecy.

What we need and what was sold to Nigerians as a campaign promise are holistic reforms to guarantee seamless flow with transparency and accountability. The government now dithers perhaps because party apparatchiks and Buhari’s men view the whole scenario as an opportunity to have a cut from the national cake that the oil sector is.

About the author: Zainab Sule can be contacted on zainabsule@yahoo.com, zainabokino.blogspot.com

Continue Reading
You may also like...
Related Topics:fuel scarcity, nigeria

Wealthy Nigerians Who Have Oil Refineries Off Shore Blocking Repair Of Broken Oil Refineries
Jerusalem Belongs To The Jews, Her Spiritual Ties With Islam Was Broken In 623 CE – Majeed Dahiru
Advertisement