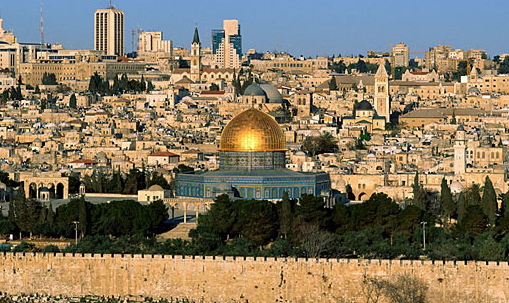 December 28, 2017 – Jerusalem Belongs To The Jews, Her Spiritual Ties With Islam Was Terminated By Allah In Year 623 CE

In a major shift from a seven-decade conventional United States Middle East policy, President Donald Trump on December 6 formally recognised Jerusalem as the capital of the Jewish state of Israel. While announcing plans to relocate United States’ diplomatic enclave from Tel Aviv, the world recognised capital of Israel, to Jerusalem, Trump said “today we finally acknowledge the obvious; that Jerusalem is Israel’s capital. This is nothing more or less than recognition of reality. It is also the right thing to do. It’s something that has to be done”.

Expectedly, this foreign policy pronouncement has elicited varied reactions from across the globe. From the Vatican to Brussels and Beijing, this decision was met with subtle disapproval and caution against jeopardising the fragile Middle East peace process, as the status of Jerusalem is fundamental to achieving lasting solution to the Israeli/Palestinian conflict.

Most predictably, the Arab and Muslim world were outraged by this latest pronouncement from Washington. At a swiftly convened meeting of the Organisation of Islamic Countries in Istanbul, Turkey, Arab and non-Arab Muslim nations were unanimous in their condemnation and rejection of the United States’ recognition of Jerusalem as the capital of Israel. Palestinian leader Mahmud Abbas, while speaking at the Istanbul gathering reiterated the Arab position that “Jerusalem is and will forever be the capital of the Palestinian state”. In a show of loss of confidence in the mediation role of the United States, Abbas said “We do not accept the role of the united states in the political process from now on, because it is completely biased towards Israel”.

The position of the Muslim world was aptly captured by the opening remarks of Recep Tayip Erdogan, the president of Turkey and host of the conference, wherein he denounced the United States’ current stands as crossing a “provocative red line”. These strong words of disapproval were further emphasised in the official statement from the Istanbul gathering, which declared “East Jerusalem as the capital of the state of Palestine”, while also urging the international community to align with its position.

The statement further described Trump’s declaration “as an announcement of the United States administration’s withdrawal from its role as sponsor of the middle east peace process”. While describing the recognition of Jerusalem as the capital of the state of Israel by the US administration as “null and void”, the world Muslim body warned of the grave consequences of “a deliberate undermining of all peace efforts” that may likely add fire to the burning flame of “extremism and terrorism”.

Because Muslims hold Jerusalem to be a holy city, the presence of the Jewish state of Israel, carved out of Palestine, is a major source of inspiration for radical Islamic extremism. The Al-Aqsa mosque, together with the iconic Dome of the rock, is believed to be seated on the very spot the Prophet of Islam, Muhammad (PBUH) ascended to heaven [Miraj] on his celestial journey from Mecca. However, Jerusalem also occupies a very important position in the history of other Abrahamic monotheistic religions. The thorny contention over the status of Jerusalem in efforts to resolve the Israeli/Palestinian conflict has been made more complicated by multi-dimensional religious assertiveness, as adherents of all three dominant Abrahamic religions lay claim to the ownership of Jerusalem.

The Al-Aqsa mosque, which is considered by Muslims as the third most holy site in Islam, was built on the ruins and rubbles of the Temple of Solomon, the holiest site in Judaism. The Western Wall, which is the only surviving relic of the ruins of the Temple of Solomon, is a holy sanctuary for Jews. Jerusalem is also host to the holiest site in Christianity. The Church of the Holy Sepulchre is believed to have been built on the original burial site of Christ Jesus, the Messiah, and it is situated within the old section of the city of Jerusalem.

Going forward, it has become pertinent to subject the Muslim position that Jerusalem is a holy land in Islam to close scrutiny, as this will help to disentangle some fundamental ambiguities about the status of the world’s most contentious city. Scriptural and historical evidence does not support the entrenched belief by Muslims that Jerusalem is a holy land in Islam. That Prophet of Islam Muhammad (PBUH), on a night in the year 622 CE, ascended to heaven from a spot on a rock believed to be located in the city of Jerusalem, upon which he led other prophets of God in prayer but nevertheless was simply described in the Holy Quran as the “furthest mosque”, does not translate to all of Jerusalem being a holy land in Islam outside “its blessed precinct” of that very spot. The Miraj was essentially a celestial affair, experienced only by the prophet of Islam in company of other prophets in Holy Communion with God. The exact location of this event, generally believed to be Jerusalem, is not clearly mentioned in the Quran, neither was the exact spot, which is also believed to be the Temple Mount. Again, whatever spiritual ties Islam may have with Jerusalem was terminated when a year later in 623 CE, a revelation from Allah SWT to his messenger Muhammad PBUH, as contained in the Holy Quran, commanded Muslims to cease facing Jerusalem during obligatory prayers and that they should instead “turn thy face in the direction of the sacred Mosque”. The sacred mosque is the Kabba, which is located within the precincts of Masjid Al Haram in Mecca.

Jerusalem was only incorporated into the Muslim world in 637 after a prolonged siege that led to the fall of the city to Muslim forces under the supreme command of Caliph Umar. By the time of the Muslim conquest of Jerusalem, the city was part of the province of Palestine within the lager Christian Byzantine Empire. Thus began the Islamisation and Arabisation of Judeo-Christian Palestine. The Muslim conquests of Judeo-Christian Palestine, much like the conquests of Christian Syria and Christian Constantinople (present day Istanbul, Turkey) were not inspired by any scriptural injunctions. These wars were essentially the spread of Arab Muslim rule and not the spread of Islam. In each of these conquered territories, magnificent mosques were erected as not only centres of worship but as symbols of Muslim power. Deliberately chosen are the locations of these magnificent mosques on pre-existing sites of Judeo-Christian worship centres.

Just as the Dome of Rock together with the Al Aqsa Mosque were built on the ruins and rubbles of the Jewish Temple Mount in Jerusalem and designated the third holiest site in Islam after the Masjid Al Haram in Mecca and Prophet’s Mosque in Medina, the Umayyad mosque (the Great mosque of Damascus) was designated the fourth holiest site in Islam and actually built on the site of a Christian Basilica dedicated to John the Baptist, following the Muslim conquest of the Levant in 634 CE. Similarly, upon the conquest of Constantinople by the Muslim Ottoman Turks in 1453, the Greek Orthodox Christian patriarchal basilica, famously known as the Hagia Sophia, was converted to an imperial mosque used throughout the four century existence of the Ottoman Empire.

Unlike the Masjid Al Haram in Mecca and the Prophet’s Mosque in Medina, whose status as sacred sites in Islam are indisputable because they are scripturally sanctioned and their physical manifestation were executed by God’s command to his Messengers [Ibrahim AS and Muhammad PBUH] respectively, hence making Muslims rever both cities as holy, the Dome of the Rock and the Al Aqsa Mosque do not enjoy such divine status in Islam. Muslims are only obligated to visit the sacred Mosque in Mecca for pilgrimage and not Jerusalem. The current site of the Dome of Rock was said to have been suggested to Caliph Umar (the conqueror of Jerusalem) by Ka’ab al-Ahbar, a Jewish Muslim convert who described the “farthest Mosque” as the Temple Mount. The actual construction of the Dome of Rock was completed by Umayyad Caliph Abd al-Malik in 692 CE, sixty years after the death of Prophet Muhammad in 632 CE. All three figures involved in the conceptualisation and actualisation of the Dome of the Rock on the Temple Mount were ordinary mortals without divine commission. Their actions were not guided by divine decree, as they were merely acting within the limits of human imperfection. To believing Muslim men and women, it should be remembered that when “Allah wills a thing, he but says to it be and it is”. If it was the will of God for Jerusalem to be a holy land for Muslims, like Mecca and Medina, it will be without dispute.

[About the author: Majeed Dahiru, a public affairs analyst, writes from Abuja and can be reached through dahirumajeed@gmail.com.]