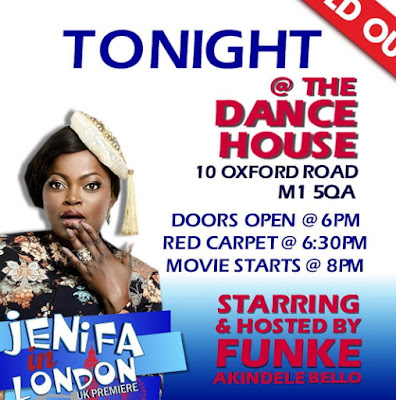 November 6, 2016 – Funke Akindele Jenifa In London Premiere Now The Most Sold Out Nigerian Film Show In The UK

Nollywood comedain Funke Akindele, though married to London-based singer, Abdulrasheed Bello, aka JJC, has long ‘possessed’ London as her second home outside of Lagos.

It is not clear how the Glo ambassador and crossover thespian got to this point in her life, but recent events show that just as Genevieve Nnaji was practically living in Ghana in her heydays, Jenifa, as Funke Akindele is otherwise called, enjoys a fan base that endears her to London than any other city in the world.

This weekend, the actress holds sway with the three premieres of a two-hour cut of her current series, Jenifa’s Diary, a feat never attained by any of the Nigerian films which have been premiered in London.

Promoters of the back-to-back screenings which kicked off on Friday, at The Lighthouse, Camberwell Rd, London, followed today’s show at The Dance House, 10 Oxford Road, Manchester, and another leg tomorrow, at the The Lighthouse, London, say Funke Akindele’s events despite being staged in series, happen to be the most sold-out of Nigerian film shows in the United Kingdom.

How would you describe Funke’s popularity in London? I asked her event manager, DJ Abbas in London recently.

Continue Reading
You may also like...
Related Topics:funke akindele jenifa in london ticket, where to buy ticket funke akindele show