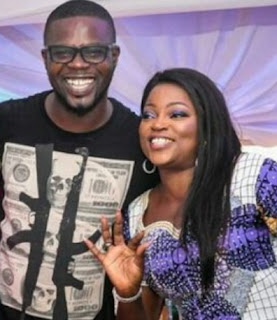 NG can confirm with you that Nollywood comedienne Funke Akindele Bello is currently mourning the loss of her twin babies.

The actress who reportedly conceived through IVF is said to have lost her babies months ago but kept mum even as fans and some of her friends were desperately seeking for answers when they saw her with flat belly with no evidence of childbirth for the first time last week.

A group of 3 Nollywood stars who met at a function yesterday broke the news to NG but the main source who broke the sad report said she was told Funke Akindele delivered her babies (a boy and girl) dead months ago but decided to keep mum to confuse her adversaries while hoping for a miracle conception.

The source said the actress wishes to keep the news of her still birth off the media because it is something that brings sorrow to her anytime she remembers.

Another source added that the actress is planning to release a press statement to clear the confusion soon.

The Nollywood source hinted that Akindele was told to hold on for now and conceive before breaking the sad news.

“When Funke Akindele was travelling out to deliver her babies, I saw her because she was really heavy.  She even advised us not to take her pictures. It is very painful when my husband’s friend told us that the babies came out dead.” – the source added

NaijaGists was told the actress delivered a baby dead while another one who came out in a distressed state died hours later despite doctors intervention.

Her hope of becoming a mother may have been dashed into pieces but she should never lose hope because with God all things are possible.