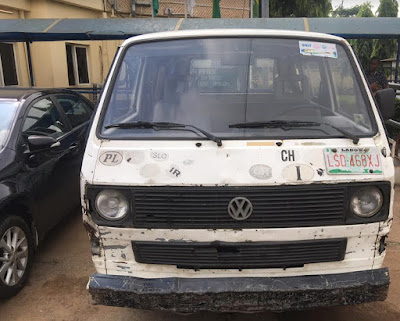 20-year-old Liberty Whitney 20 from Warri in Delta State had her valuables recovered from “one chance” robbers by the men of the Rapid Response Squad of the Lagos State Police Command. 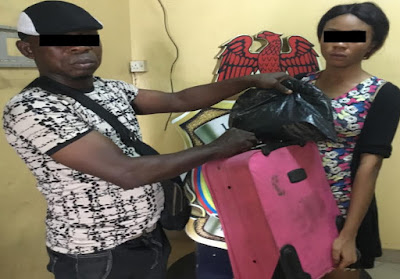 The International relations graduate from Lead City University, Ibadan,was on her way from school at about 9.30pm on Sunday 19th, boarded an unpainted transport Vanagon public bus from Oshodi to Mile 2. She was the only passenger in the vehicle as at the time she boarded.

Minutes after moving, more passengers came on board and the bus was left with two empty seats. On getting to Rainbow bus top, two men boarded the bus and that was when pandemonium struck.

The men unleashed mayhem on the passengers. According to Whitney, she said, “the bus was slowing down to pick passengers at Cele bustop when two guys in white native attires, having two guns each and pointing at us while asking that we remained calm and do as we were told.”

She continued that, while other passengers were screaming and jumping down from the bus, she was held by a man that had joined the bus earlier and unknown to others, was a member of the gang, he pulled her back so she could get robbed. 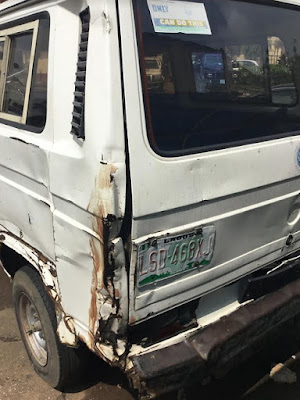 She noted that when she made another attempt to jump down, one of the robbers, now three (3) brandished a gun in her face with threat of getting shot if she didn’t comply, he asked her to part with her valuables.

She said” One of them asked me for my phone, bag and money and when I was reluctant, he hit me on my neck-line close to my chest with the butt of the gun with him. I couldn’t breathe well for some minutes. I handed over all I had with me instantly, my travelling bag, polythene bag, laptop, phone, chargers and school certificates.

I was allowed to jump down from the vehicle. Barely some minutes later, i heard a gun shot then a guy was thrown off the bus. He had been shot by the side. He hung on the back of the bus. I don’t know why he did that though but It was at this point that RRS men chased the vehicle with bikes. The robbers shot several times in the air but the policemen went after them”

The robbers on getting to mile 2, skedaddled from the vehicle, abandoning the bus. Whitney said she followed the bus and the police at a reasonable distance on a bike until the robbers stopped and ran. She was able to get her valuables and documents back except for her phone that the robbers took with them.

It was after she was calm she realized that the man that had been shot and clung to the back of the bus was the driver. He was fighting for his bus which was his only source of livelihood.

The driver passed away on Thursday, 23rd November after all efforts to revive him at the Critical Care Unit of the Lagos State University Teaching Hospital, Ikeja failed. He died of the gun-shot wound he sustained at the hands of the robbers.

The Lagos State Police PRO, SP Chike Oti, while confirming this incident explained that investigations are on going to clamp down on the robbers.

He however advised that people should not drag valuables with robbers especially when they are armed. The case has been transferred to SCID, Panti for further investigations.

Continue Reading
You may also like...
Related Topics:bus, driver, kill, one chance, robbers