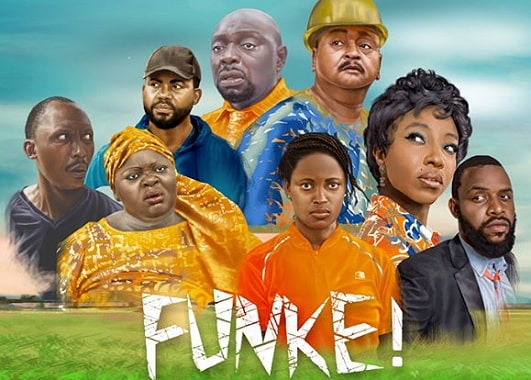 A new Nollywood movie titled Funke is now playing in cinemas across the country.

The movie aimed at encouraging parents to always support their children or wards in the pursuit of their dreams, has been released in cinemas across Nigeria.

Featuring Jide Kosoko, Segun Arinze, Frank Donga, Dima Okojie, Seun Omojola, Eniola Badmus and others, Funke tells the story of a girl, who loves football and decides to become a professional football player in an era where it is a taboo for a girl child to be seen playing football. But things do not go smoothly for her.

Speaking at the press screening held in Lagos recently, the producer of Funke, Jerusalem Dzuamo, said it was necessary for parents to support their children’s dreams, as it would go a long way in shaping their future.

Here is what the Benue native said about the movie:

“We wanted to release Funke during the Russia 2018 World Cup, but there were challenges. We focus on a young lady and her determination to pursue her dreams despite obstacles that befall her. After giving birth to children and training them, parents must allow them to be who they want to be.

“If we are to make a difference in Nollywood, we need to diversify the way we tell our stories. We do a lot of comedy movies, but we need to talk more about dreams of people and challenges we face as a people.”

“In the course of writing the story, we had certain actors in mind but we could not get to some due to the time frame. Apart from being a child-friendly movie, we wanted to have a bit of seriousness and comedy too. This made us work with the likes of Frank Donga, Eniola Badmus, Jide Kosoko and Segun Arinze. As you saw also, Miracle Inyanda, who plays the lead role, shows the world her potential.”