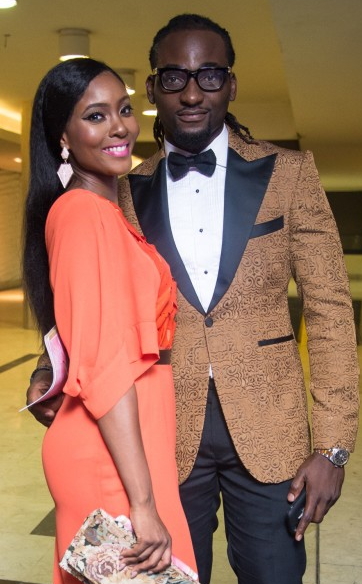 How did you meet?

Both: We met on the set of Tinsel.

What attracted you to each other?

G: It was how much of a friend she was to me coupled with the fact that we have similar interests.

O: Gbenro is very easy on the eyes obviously but what attracted me was his kind spirit and funny personality.

He makes me laugh all the time.

How long did you court?

O: We dated for almost three years before he proposed.

How did he propose?

O: He surprised us with a trip to the ‘Statue of Liberty’ and he proposed there. It was quite surprising and romantic.

This was a trip we always tried to do whenever we were in New York, but at one point or another, it never happened until that beautiful day on August 17, 2014. It was perfect.

At what point did you decide to get married?

Did any of your family members oppose your decision?

G: Everyone was happy and excited. We were blessed with all the love and support from our family and friends. Actually, it was beautifully overwhelming.

What are the initial challenges after you got married?

Both: Hmmm, probably having to go back to work and get back on our hustle. It was a sweet period we didn’t want to end.

What are the most romantic gestures he/she has ever shown to you?

G: Osas is the S.I (standard international) unit of romance and love. She is always on 100% with all that by default – so I honestly do not know which is the most romantic gesture.

O: Hmmm, Gbenro doesn’t like to do the expected which always keeps me on my toes.

The most romantic was probably when he proposed.

How would you describe married life so far?

Both: It’s calm and cool. Too blessed to be stressed.

How do you settle misunderstandings?

How many Valentine’s days have you spent together and which is the most romantic?

They have all been sweet, fun, romantic and adventurous. The most romantic was probably the first one. He surprised us with a trip to Obudu Cattle Ranch in Cross River- it was so beautiful.

It was truly a wonderful time.

What’s your plan for this year’s?

O: He is surprising me with something so I have no idea… but I’m sure it will be unforgettable.

How do you spend quality time as a couple?

G: We do so many different things but time at home with just the two of us is always the best.

How do you ensure you both stay scandal free as a celebrity couple?

O: Well, we keep our personal situations just between us.

We learned that from when we were dating. I guess that’s the reason why so many were surprised when he even proposed because they had no idea we were even dating in the first place.

We do appreciate when people want to celebrate us, it’s flattering, but keeping our personal life out of the limelight is a priority for us.

How do you both handle love gestures from the opposite sex?

O: Ha! We actually both laugh over it – more for Gbenro…

He gets so many love gestures from so many women. We understand it’s the industry we are in and he is obviously a great catch of a guy. Again, it’s quite flattering but mostly we laugh about it.

What’s your advice to other married celebrities?

Both: Keep God first and let ‘love’ be the priority above everything else.