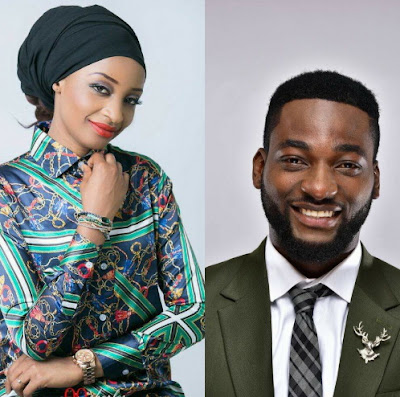 Nollywood’s new generation actors; Gbenro Ajibade and Rahama Sadau, have emerged as the hosts of this year’s edition of Best of Nollywood (BON) Awards taking place in Abeokuta, Ogun State.

According to Seun Oloketuyi, executive producer, BON, the duo would direct affairs at Nollywood’s most prestigious reward platform holding on December 16, 2017 in the rock city. He said: “The choice of Rahama and Gbenro was a painstakingly debated one. Our criteria were diversity, versatility and youth; some other names came up for consideration but Gbenro and Rahama ticked the boxes. And we are happy at their enthusiasm and acceptance to be a part of history.”

A successful model cum actor, Gbenro, is one of the more popular acts in Tinsel. The Biology graduate of the Benue State University has also featured in several home videos including The Wages, Twisted Throne, Gbomo Gbomo Express and 10 Days in Suncity among others. Married to fellow thespian, Osas Ighodaro, with whom he has a baby girl, Gbenro says he dreams of a day “when I’d have contributed significantly to the arts and entertainment industry globally to earn me a spot in the Guinness Book of World Records or the Hollywood Walk of Fame and when the characters I play come alive and begin to transform lives, and significantly create an impact on society and popular culture in general.”

One of the breakout stars of Kannywood who has successfully transited to mainstream Nollywood, winsome Rahama Sadau is a Business Administration graduate of the Kaduna Polytechnic.

Crowned “Face of Kannywood” at the City People Entertainment Awards 2016, Rahama has featured in popular soaps like Super Story, MTV’s Shuga – Season 6 and Sons of the Caliphate while playing prominent roles in movies like Ajuwaya, Tatu and The Accidental Spy.

She says, “In addition to acting, I also produce my own movies, one of which is the recently completed Rariya. Furthermore, I participate in charity and humanitarian work and visit Internally Displaced People’s Camps regularly to offer support and aid through my charitable initiative ‘Ray of Hope’.

which I launched in 2016. I am very ambitious and since my first appearance on screens, I have worked hard to build the ‘Rahama Sadau’ brand.”

Meanwhile, as the organisers of the award released the nominees list, focus is on the Best Actress category where Omotola Jalade Ekehinde (Alter Ego), will slug it out with younger, equally tested actors like Mitchell Dede (What Lies Within), Ufuoma Mcdermott (The Women), Rahamatu Sadau (Tatu) and Esther Audu (Inikpi).

No less stiff is the competition in the Best Actress in Supporting Role (English) category where the nominees are Queen Nwokoye (Excess Luggage), Bayray Mcnwizu (Trace), Bisola Aiyeola (Picture Perfect), Toyin Abraham and Funlola Raimi (Tatu) and the trio of Kate Henshaw/Omoni Oboli/Katherine Obiang for their role in The Women.

Continue Reading
You may also like...
Related Topics:award, bon, nominees