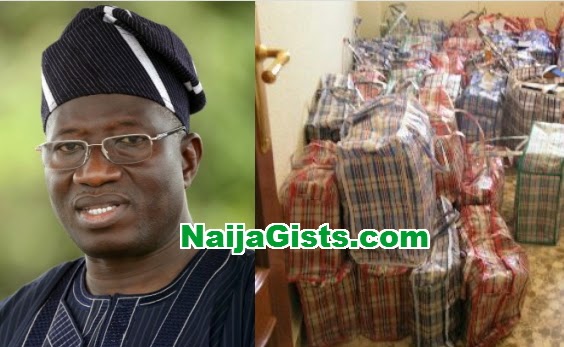 President Goodluck  Jonathan who came to Lagos on a 5-day visit last week dropped one of the largest bribes in the history of election in Nigeria.

According to eyewitnesses who came to meet Jonathan at the State House in Marina Lagos, several Ghana Must Go Bags filled with raw US dollars were seen taken out of the meeting by some leaders of coop societies in the South West last Friday.

Though the president promised to build the first ever Cooperatives University in the Southwest, it was alleged that the leadership of the cooperative societies got $5 million (N10 billion) from the president so that they could support his ambition.

“It was the first time I saw dollars being packed in ‘Ghana-Must-Go’ bag,” a source at the meeting was quoted as saying.

One of the coop societies in South West reportedly got N200 Million naira after converting the dollars to Naira while others received N120million each.

All the cooperative societies in Lagos reportedly received 1 billion Naira while the rest N9 billion went to the other states in the South West.

Dollars in Ghana must go when unemployed graduates are roaming about the streets with nothing to do.

These politicians must be aliens from another planet with no emotion.

This and other corrupt practices is why crime rate is increasing in this our dear country.

Can you image one of the wealthiest oil rich countries in the world with the highest poverty rate.