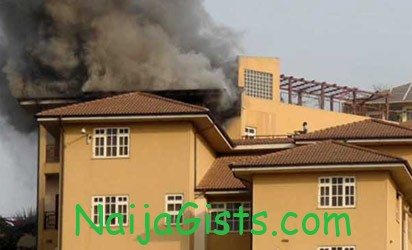 In a news briefing today Obasanjo was spotted laughing hysterically at the incident many considered a serious matter.

Speaking in Yoruba language, General Olusegun Obasanjo said “Elo so fun Gbogbo aiye wipe Ile oba to jo ewa lo bu si” meaning – Go and announce to the whole word that the king’s house gutted by fire deserves beautification.” as a result, he dismissed newsmen after the above statement

Olusegun Obasanjo’s multi-million naira hilltop mansion located in Abeokuta, the capital city of Ogun State, was destroyed  by a raging fire for about thirty minutes on Thursday evening before firefighters calmed the inferno.

We learnt the fire started from his private office and a fire ball that came out of his office raised the alarm before fire officials were called to the spot.
According to officials, power surge was the cause of Obasanjo’s mansion fire.

A source said Obasanjo is fully aware of the original cause of the fire. It’s more than power surge, it’s a spiritual attack and he is aware of the source. That justifies why he spoke in proverb.