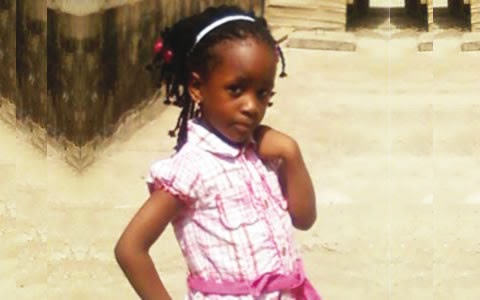 The case of little Oluwaseun Ogungbemile who was declared missing few days ago at the Redemption camp has been upgraded to abduction.

The sudden disappearance of a five-year-old Oluwaseun Ogungbemile from the Redemption Camp of the Redeemed Christian Church of God, Ogun state still remains a mystery to the family who are yet to ascertain the whereabouts of the little girl.

The confused and highly demoralized parents had since the incident resigned to fate as their efforts to find their daughter yielded no positive result.

DailyPost gathered that the victim, in company of her parents, had gone to the camp at Kilometre 46 on the Lagos-Ibadan Expressway, Ogun State, to attend the just concluded convention of the church under the theme: Jesus.

Reports say, the girl, who is the youngest child of her parents, was last seen playing with two of her cousins on Friday, August 9, 2013 during the convention.

Oluwaseun’s aunt, Omotade Odunowo, while narrating the story said they had reported the case to the police, while still waiting for their investigations.

She said, “She (Oluwaseun) was staying at a rented chalet in the camp alongside her parents. Around 10am on that day, she was seen with two of her younger cousins, who are between the ages of two and three.

“After sometime, we did not see her again. Because those playing with her when she disappeared were all children, we have not been able to know what happened exactly.”

According to her, since they had ransacked everywhere in the camp and reported to the relevant authorities in RCCG, yet Oluwaseun cannot be found, they believe she must have been kidnapped.

However, she added that no one had called the family to demand for any ransom.

Odunowo said, “We have been traumatized since then and cannot wait for the safe return of our daughte. We shall therefore be extremely grateful to receive any information that may lead to our reunion with Oluwaseun. She is adorable, smart and talks a lot.”

She said the victim’s mother had refused to go back to work since the incident happened.

She said, “Oluwaseun’s mother has not left the Redemption Camp since the incident occurred. She is still hoping that the person that took her away would bring her back.”

The Ogun State Public Relations Officer, Muyiwa Adejobi, who confirmed the incident, said the matter was currently under investigation at the Redemption Camp Police Station.

“The parents of the victim said they came to the camp with eight children and one of them had gone missing. We have swung into action and we want to assure the family that the little girl will be found,” he said.