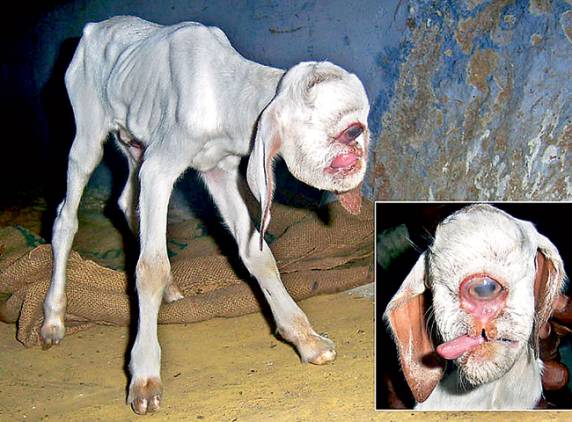 A strange birth of a goat with one eye (one-eyed goat) that took place on a farm in India is still baffling the owner presently in India. naijagists.com

45-year-old Kandasamy is an experienced farmer who specializes in breeding goats.

The farmer said the birth of this one-eyed goat creature is the most shocking occurrence of his life since his 10 years in animal farming.

“I have never witnessed such an incident in the past,” he said. “A female goat gave birth to two calves, one of whom has just one eye right in the centre of its forehead.” – the farmer said

According to Indian Veterinarian, Dr K. Asokan, the director of VOC Park & Zoo in Coimbatore, Tamil Nadu, India, the one-eyed goat birth is a rare genetic disorder caused by chromosome changes in the goat’s system.

“It’s rare to see such goats in the villages,” Dr Asokan  said