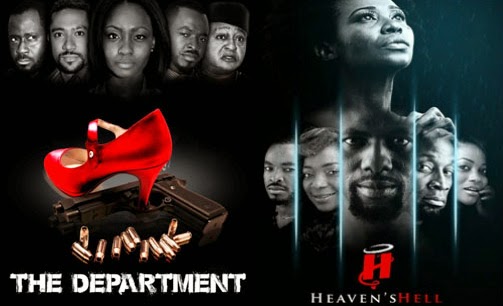 FilmOne To Open 2015 Heavens Hell, Gone Too Far and The Department

After successful theatrical distribution in 2014, a leading movie distribution and production firm, Filmone now has its eyes sets for 2015 as its opening the year with three major movies.

On January 16th 2015, “Gone Too Far”, a British/Nigerian comedy produced by Poisson Rouge Pictures and con-funded by the British Film Institute, starring O.CUkeje, Adelayo Adedayo, Malachi Kirby, Bhasker Patel, Pooja Shah, Tosin Cole and directed by fast rising female British/Nigerian Director in the UK, Destiny Ekaragha, will set the ball rolling. Ikudayisi (O.C Ukeje) travels from Nigeria wearing socks and sandals to meet his enstranged brother, Yemi, for the first time in Peckham. Yemi (raised in the UK) questions both his judgment and his African heritage. O.C. Ukeje plays the comical role of a typical bush African in the midst of toosh folks. A day on the estate filled with danger, excitement, and romance, teaches them the values of family, self-respect and makes Gone Too Far, a movie you can’t afford to miss. 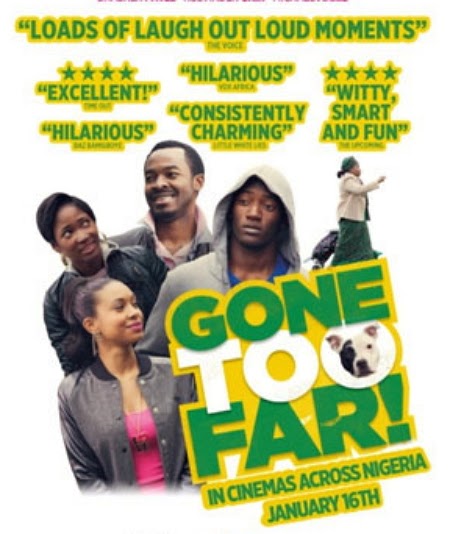 Sequel to this, “Heavens Hell”, a psychological thriller, produced and directed by Katung Aduwak (Big Brother Nigeria Winner) will hit cinemas on January 23rd 2015. The movie stars Nse – Ikpe Etim, Bimbo Akintola, Damilola Adegbite, Chet Anekwe, Fabian Adeoye Olojede, O.C.Ukeje, Kalu Ikeagwu, and Gideon Okeke. Heavens Hell, which is based on a true story, unveils the lives of two housewives who are best friends (played by Nse and Bimbo) and that of their husbands (played by Fabian & Chet). Their lives are held together by a rock-solid friendship but soon laced with deceit, betrayal and a lurking darkness. It’s a movie that will keep your eyes riveted on the Big screens.

Think Corporate Espionage and think “The Department”, which is a break away from the usual norm of story-telling. A secret organization tagged ‘The Department’ run by young professionals,blackmails Top Executives into selling their companies to the ‘man’ behind the Department. Two lovers opt out of The Department, and the pressure, intrigues, blackmail from the group, soon tests their love for each other. The action/romance/crime genre based movie parades stars; Majid Michel, Osas Ighodaro, JideKosoko, Desmond Elliot, Funky Mallam, Seun Akindele and is billed for theatrical release on January 30th 2015.Catch all the action and excitement in this fantastic movie.

“FilmOne distribution has clearly become the brand synonymous with quality theatrical releases. We can never compromise with quality content which encompasses sound technical values. We look forward to 2015 with enthusiasm, as we have an array of great movies that Nigerians and Non-Nigerians will find highly entertaining and worth their time and money”.

In 2014, FilmOne Distribution, the foremost theatrical distribution company in Nigeria, brought to the nation’s viewing delight, three blockbuster movies. The highly acclaimed “Half Of A Yellow Sun”, which beat Marvel/Disney’s blockbuster, Guardians of the Galaxy, at the Box office, while setting a new Weekend Box Office record;“October 1”, superseding other movies in its month of release, with Exhibitors trying to keep up with the high demand from the mammoth crowd that besieged their premises to watch same; ‘Looking for love in Lagos’ became a tag line particularly amongst youths, with the romantic comedy of the year “When Love Happens”, unveiling youths with acting dexterity and comical wits that made movie goers fall in love with the movie. Even the most hilarious addictive comedy of the year, “Head Gone” is successfully making its cinematic rounds.

Watch Gone Too Far trailer below: