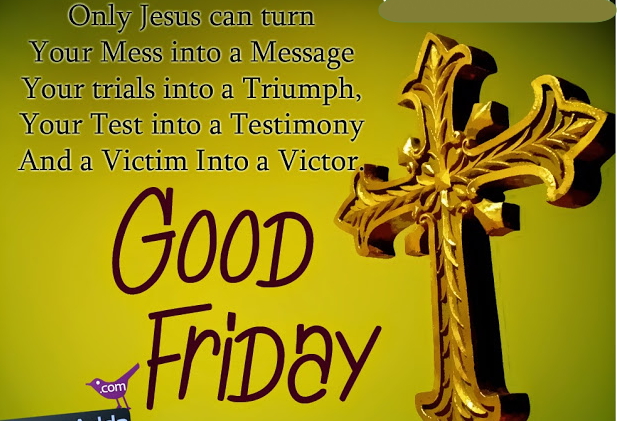 April 14, 2017 – Good Friday Inspiration: Hold On To Jesus, Because After The Suffering Comes Supernatural Intervention

Simon Peter was a man whose life and ministry were interspersed with the good, the bad and the ugly. The event cascading to his call, as recorded in Luke 5:1-11, brought him out as a man of diligence, selflessness and faith. He obeyed Jesus Christ mindless of toiling all night without catching anything.

He cast aside the business failure of the previous night and surrendered his boat and services for dispensing the word of God at Jesus’ request. When the time for Jesus’ crucifixion was near, He informed Simon Peter that “….. this night, before the cock crow, thou shalt deny me thrice”. Peter replied Him that “…Though I should die with thee, yet will I not deny thee. Likewise also said all the disciples” (Matthew 26:34-35).

True to Peter’s words, few hours later when Judas Iscariot led the Chief priest and others to arrest Jesus Christ, Peter, in a show of courage, “…. stretched out his hand, and drew his sword, and struck a servant of the high priest’s, and smote off his ear” (Matthew 26:51). Although he had displayed that act of gallantry, he no sooner thereafter became a turncoat and manifested spinelessness – Peter betrayed Jesus Christ thrice to the extent that at a time he denied with an oath and at another time he denied he ever knew Jesus Christ cursing and swearing (Matthew 26:72-74).

“All the world’s a stage’, according to William Shakespeare, ‘and all men and women merely players: they have their exits and their entrances; and one man in his time plays many parts, his acts being seven ages”. This gives further credence to the fact that life is surely not only a stage with different actors, but need be added that life is also in stages, acts, scenes and phases.

One stage of life dovetails into another unpredictable stage; in fact, life is a continuum of stages. In view of the unpredictability of human beings, what is pertinent for everyone, particularly people that are dancing to the Victory song of today is to learn from Jesus Christ’s experience on His way to the cross that human beings are unpredictable, unreliable and be mindful of the fact that after the Victory song of today (Mark 11:9.10), a hymn of betrayal can follow tomorrow (Mark 15:12-14).

Even when Pilate asked who they wanted to be killed between Barabbas, a notable prisoner, the chief priests and the elders persuaded the people to opt for the innocent and free the prisoner (Matthew 27:15-23). Beloved in Christ, the only person who can and will never change or betray you is the Almighty God (Jeremiah 17:5-8).

As this year’s Lenten season is ending, it is non elective to continue to stand with Jesus Christ and trust in Him alone; anything to the contrary is an invitation to disappointments, betrayals, sadness, high blood pressure and sudden death.

Paul, despite being a giant in faith, was once in a very challenging situation that defied human assistance at Asia. There, his travail, as recorded in Acts 19:22-41, was so humorless that when the uproar ceased he departed to Macedonia following opposition which arose because of The way (Acts 9:2).

In fact, there was a man called Demetrius, a silversmith, who was making shrines for Artemis and was losing business because of the Way (Acts 16:16, 19). Demetrius ganged up with other workers of similar occupation and they raised up great antipathy towards Paul.

He was in a quagmire between who to follow – himself, loyalists, friends or God. He was helpless and hopeless but he “…. had the sentence of death …. not to trust in ourselves, but in God which raiseth the dead” (2Corinthians 1:9). Paul sentenced himself to the fact that no matter what, he would not trust in himself or his ability or anyone but repose his trust in God who alone has the power to raise from the dead. God intervened and raised up Alexander who spoke for him.

In whatever dire situation you may be in today (economical, matrimonial, occupational, physical or financial), as you put your trust in God, He would intervene in your situation, He would send help to you and raise you ‘from the dead’, in Jesus’ name.

It is unfortunate that many people in the world today have faith or trust in ephemeral beings, things and positions – that are here today and not there tomorrow. In order to stay afloat in this world and be able to steer the affairs of life to where God desires to take you to, you must eschew the attitudinal traits of the Israelites who “…… committed two evils; they have forsaken me the fountain of living waters, and hewed them out cisterns, broken cisterns, that can hold no water” (Jeremiah 2:13).

You must depend absolutely on the leading of the Holy Spirit and avoid putting trust in your education or knowledge (cf Acts 27:9 ff) or depend on any man because human beings alter their stands and positions at frequent will ( Micah 7:5-6). No matter how sound or seemingly dependable medical practitioners are for instance, they have their limits ( cf Mark 5:25-34). Even parents are not omnipotent and can fail (Isaiah 49:15-16).

It doesn’t matter therefore, what you may be passing through, hold tightly to Jesus Christ and remember that after the sufferings of Good Friday and/or the seeming silence of the Father on Good Saturday, there shall come the Supernatural intervention of the Father on Easter Sunday.

May the Almighty God intervene in the affairs of your life, send angels to you from above, roll away that stone of hindrance, bring to life dead opportunities, put an end to all the challenges of today, put the enemies of your calling to shame, restore your lost grounds and at last, give you grace to inherit eternal life, in Jesus’ name.

Prayer: Father, thank you for this year’ Lenten season that is ending, Lord give me grace to continually depend on you in this uncertain world and times, in Jesus’ name