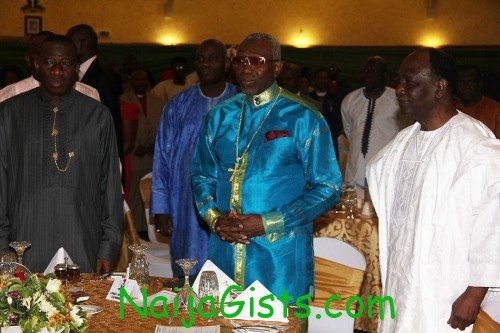 During the second National Presidential Breakfast Prayer Programme that took place on Saturday April 14, 2012 in Abuja, President Goodluck Jonathan made some honest remarks in a bid to seek God’s intervention in the myriad of problems facing the country. naijagists.com

He said :”I always make my supplications to God that, in selecting me as the President of this country, the Vice President, the Governors, members of the national assembly, the ministers, we are not the best material but God knows why he chose us and we pray He should use us to change this country.

“We believe that with God using us collectively we will be able to transform this country. We all as Nigerians want a better country, we want a country that there would be peace, power, that will take care of our health needs, that we can move freely from one part of the country to the other, that our children will have hope.”

He expressed optimism that the problems were not too much for God to solve and Nigerians only needed to trust Him.

“With unwavering faith in God and renewed recommitment to the national cause by us all, I’m confident that Nigeria will emerge from these trying times a stronger, more united, more stable and more prosperous nation.

“Now than ever before, our nation’s leadership needs to rededicate itself to the realisation of the grand vision of one big strong multi-ethnic, multi-cultural, diverse but united nation which steered our founding fathers. We must live above those primordial tendencies which can only compromise our growth as a nation. We should be guided by the ideals of justice, equity, selflessness and above all the fear of God in every conduct public or private,” he said.

President Jonathan noted that the country can only attain its heights and endowment which God has destined if Nigerians are individually prepared to make the requisite sacrifice as “championing narrowing sectional causes does not add value to our national development efforts”.

On the promises he made during the electioneering campaign, he said:”Our administration was voted into office by overwhelming majority of Nigerians cutting across ethnic, social, cultural and even political barriers. We therefore owe all Nigerians the sacred duty to toil endlessly for the enhanced welfare and wellbeing of all. This is a duty I have vowed to commit my all to achieve.
Goodluck Jonathan’s Presidential Breakfast Prayer Speech Transcript

“I am aware that the task of national transformation is daunting one, I am, however, more aware that there is nothing that God cannot do. With Him on our side I am confident every stumbling block on our way shall become a stepping stone into national rebirth. I assure you that our trials at all times for the greatest good of the greatest number guided always by the fear of God.”

Earlier in his message, the President of the Christian Association of Nigeria, Ayo Oritsejafor said it was pertinent that Nigeria builds an altar.

If my people, which are called by my name, shall humble themselves, and pray, and seek my face, and turn from their wicked ways, then I will hear from heaven, and will forgive their sin and heal their land 2 Chronicles 7:14