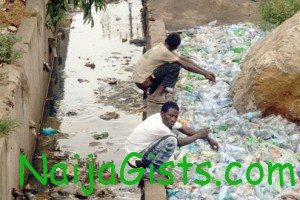 According to a report released by World Bank on Monday April 16, 2012, over 32 million Nigerians have no means of defecating their faeces.

Most of these unfortunate folks opt out for open defecation as an easy means. naijagists.com

“The desk study, Economic Impacts of Poor Sanitation in Africa, found the majority of these costs to production come from annual premature deaths, including children under the age of five, due to diarrheal disease. Nearly 90 percent of these deaths are directly attributable to poor water, sanitation, and hygiene.

Other significant costs were productivity losses from poor sanitation, and time lost through the practice of open defecation.

Adverse impacts of inadequate sanitation that are likely to be significant, but difficult and expensive to estimate, include the costs of epidemic outbreaks; losses in trade and tourism revenue; impact of unsafe excreta disposal on water resources; and the long-term effects of poor sanitation on early childhood development,” the report’s Executive Summary said.

In the portion on Nigeria, it said, “Poor sanitation costs Nigeria 455 billion Naira each year, equivalent to US$3 billion, according to a desk study carried out by the Water and Sanitation Program (WSP).

“This sum is the equivalent of US$20 per person in Nigeria per year or 1.3% of the national GDP.”

It also said 70 million Nigerians use unsanitary or shared latrines.

It also said “the poorest quintile is 10 times more likely to practice open defection than the richest.

Open defecation costs Nigeria US$1 billion per year – yet eliminating the practice would require less than 6.5 million latrines to be built and used.”

The World Bank warned that “open defecation not only has higher costs than any other sanitation practise, it has considerable adverse social impacts. Low cost and effective ways of stopping open defecation need to be scaled up.”

Open defecation in year 2012. Where is Nigeria going?