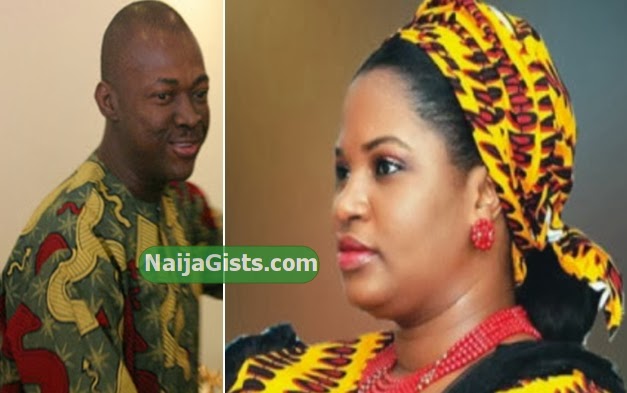 The marriage between Enugu State’s Governor Sullivan Chime and his wife, Clara has finally come to a negative end today months after he (Gov. Chime) allegedly impregnated his wife’s sister.

According to Punch.com, Enugu’s First Lady, Clara Chime today stated that she was forced to remain as wife of the ailing Governor.

She said she would have walked away from the marriage during the period Chime was sick and away for five months, but remained on “very compassionate grounds.”

Mrs. Chime said her thinking was that sickness would change the governor’s ways towards her, but stated that he even got worse months after his return from undergoing a cancer treatment abroad.

According to her, on many occasions she attempted to leave, her family members, for pecuniary reasons, insisted she stayed put.

She said even when it was apparent that Chime no longer wanted the marriage, her family wouldn’t let her go.

She made this disclosure through the mobile telephone set of one of her male siblings, about four hours after she eventually packed out from the Governors Lodge.

The sibling declined revealing his identity to The PUNCH, but stated that he was one of the few family members who supported Mrs. Chime’s agitation to quit the marriage.

He said if he revealed his identity, it could cause a stir between him and other family members, who were still holding meetings with members of the Chime family on the matter.

He claimed that the governor had long lost interest in the marriage but held forth because he (Chime) didn’t want any scandal over the issue.

“So, there was no need joining other family members into forcing her to remain in a marriage that he (the governor) was no longer interested in,” said the source.