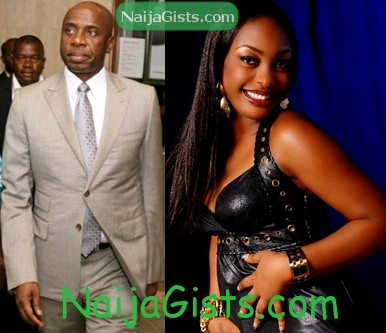 According to a reliable report, Rivers state Governor Rotimi Amaechi is currently in a secret romance with upcoming Nollywood actress Nuella Njubigbo. naijagists.com

Late last year, we learnt the beautiful actress bought a brand new N8million Toyota Highlander SUV. If you missed the report, click here to read it.

When she released the photo of her brand new wonder on wheels, congratulatory messages started coming in from left right and center.

Critics however wondered how the upcoming star was able to gather enough funds for the expensive SUV.

They said even her 2-years saving can’t afford the expensive vehicle.

It was revealed that Nuella Njubigbo is currently in a top secret romance with Governor Rotimi Amaechi who is popularly known for dating beautiful stars.

We learnt the lovers met secretly in November of last year in Port-Harcourt, Rivers State after they allegedly exchanged numbers during a Nollywood function.

Nuella Njubigbo was later reported to have escorted the wealthy governor abroad on official trip and when she came back, Amaechi was so smitten that he presented her the SUV which was SUPPOSEDLY TAKEN FROM ITEMS MEANT FOR GOVERNMENT.

Governor Rotimi Amaechi additionally gave the actress 5 Million naira to secure an apartment of her choice in eastern part of the country to facilitate easy communication.

Before her secret romance with Governor Amaechi, the actress was involved in a serious relationship with Tchidi Chikere, a top Nollywood producer who allegedly abandoned his wife for the beautiful actress.

She was later rumoured pregnant but she denied it. Nuella reportedly dumped Tchidi Chikere for a Nigerian footballer identified as Emmanuel Emenike whom she visited in Russia several times.

Nigerian actress Nuella Njubigbo is the current secret lover of Governor Rotimi Amaechi and for now, she has topped the list of few stars who have dated the handsome man and have smiled to the bank.

Actress Stella Damasus is another star who was rumoured to have dated the wealthy governor in the past.