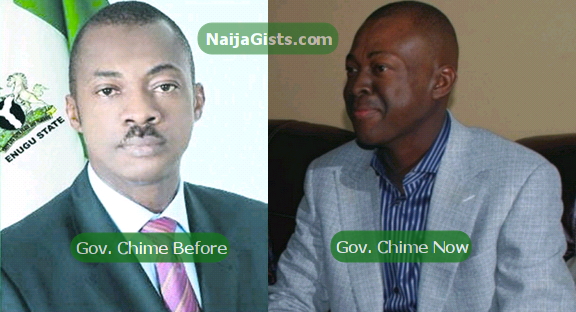 I write this today, May 2, 2013 in response to the wicked and irresponsible lie
that has once again been plastered all over the internet and in some print media
to the effect that Governor Sullivan Chime of Enugu State is dead. This is an
outrageous lie. Governor Sullivan Chime is very much alive and going about his
gubernatorial duties.

We may recall that only yesterday, May 1, 2013 Governor Sullivan Chime addressed
Enugu State Organized Labour, during the Labour Day parade in Enugu, and praised
the harmonious relationship between his administration and Enugu State Organized
Labour, underscoring that dialogue and consultation remained the best means of
resolving disputes between workers and their employers. Governor Chime even
received an Award from the workers as he promised to tackle any unresolved
issues between them. See https://thenationonlineng.net/new/news/chime-greets-workers/ .

We may also recall that the day before, on April 30, 2013, Governor Sullivan
Chime personally received members of the National Institute for Policy and
Strategic Studies (NIPSS) at the Government House, Enugu and during that
occasion he called on NIPSS to emphasize anti corruption training in its
training programmes. See
https://royaltimes.net/news/chime-wants-nipss-to-emphasise-corruption-in-training\
-programmes/.

This is, therefore, to categorically state without any equivocation that
Governor Sullivan Iheanacho Chime of Enugu State is alive and NOT dead as has
been falsely reported since yesterday May 1, 2013 or thereabout.

We also painfully recall that this is perhaps the fourth or fifth time that
Governor Chime has been falsely reported as dead since he became the Governor of
Enugu State. Of course these false reports are the deliberate, calculated and
depraved handiwork of Governor Chime’s detractors. And of course, such morbid
antics obviously cannot erase the record of Governor Chime’s solid achievements
in good governance in Enugu State. Achievements that are culminating into a
legacy the likes of which Enugu State has never seen and which will remain the
benchmark for governance in Enugu State for far into the future. Governor
Sullivan Iheanacho Chime is alive and kicking and we wish him many more healthy
and prosperous years, and may God continue to bless him. Amen.