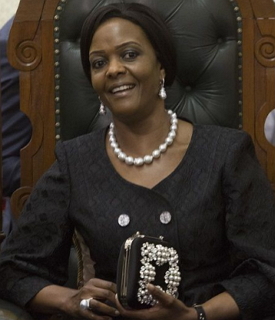 According to Herald Newspaper, Zimbabwe’s First Lady, Grace Mugabe has sued a businessman, Jamal Ahmed for selling a ring worth $30,000 instead of the $1.35million one she ordered.

The ring meant to be Robert Mugabe’s 20th wedding anniversary to his wife didn’t come as expected.

However, Mr Ahmed claimed that the ring from Dubai he supplied to the Mugabes worth $1.35million as it had been polished by a third party.

Grace Mugabe who was not sanctified with the quality of the ring ordered Ahmed to refund her money and when he failed to do so, he seized his houses in Zimbabwe.

Ahmed who has a Zimbabwean residence permit and businesses in the country soon dragged her to court for intimidation and harassment.

In 2016 December, a judge ordered Mrs Mugabe to return the seized property. Now she is suing Mr Ahmed for $1.23million to settle the alleged debt.