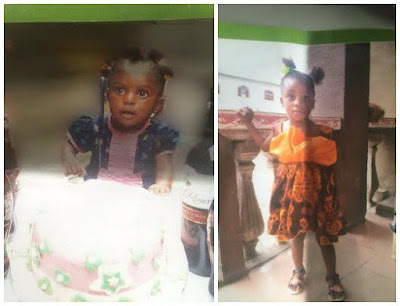 A trainee hairdresser simply identified as Rose has been declared wanted over the abduction of her boss’ children.

On Saturday the 14th of May 2016, Rose took 4-year-old Chinaza and 2-year-old Chikamso Okpara from their mother shop under the guise of trying to buy food for them and since then she hasn’t returned with the children.

The kids were playing with themselves at their mother’s shop at Olodi Apapa area of Ajegunle when they suddenly disappeared.

Rose started working with her master last Tuesday and disappeared four days after.

According to Emeka Okpara, the father of the missing girls, the children who usually stay at home followed their mother to the shop on Saturday before Ruth lured them away.

Another hairdresser who saw the suspect with the kids reportedly questioned her but she told her their mother told her to buy food for them.

Please if you see these little children anywhere, call their father on 08129390600 or report to the nearest police station.