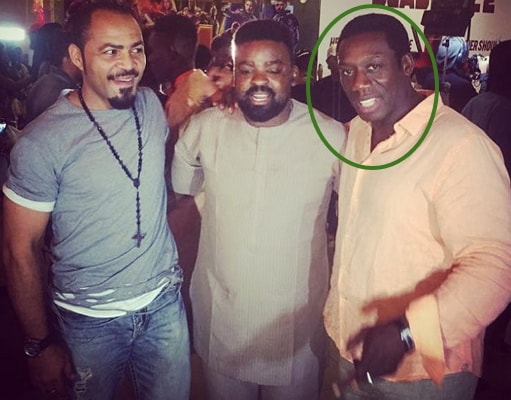 On the recent episode of African Voices, CNN meets actor Hakeem Kae-Kazim who has returned to his roots to help teach aspiring thespians. Kae-Kazim discusses the future of ‘Nollywood’ and why he feels passionate about celebrating African storytelling.

Kae-Kazim explains to the programme how his acting career began:

“My interest [in the theatre] happened from an early age, at 15 or something like that. I trained as an actor, went to the [Bristol Old Vic] Theatre School and then did the Royal Shakespeare Company in the United Kingdom, then the National Theatre… I did some amazing plays with some amazing people. I just walked my way though, doing amazing projects.”

Known best for his powerful portrayal of a Hutu warlord in the critically acclaimed film Hotel Rwanda and for his role in Pirates of the Caribbean, Kae-Kazim is now returning to his home country to help teach young actors. He explains to the programme how this opportunity came about:

“A director had come over to LA from Nigeria, had seen me work in 24, and said, ‘No one knows you’re Nigerian, you should come back, there are people who would love to see you. They’ll be surprised that you are Nigerian.’ So off the back of that I thought, you know, what a good idea. Let me go back and see what’s going on.”

Kae-Kazim outlines why he wants to share his knowledge:

“I’ve come back to do some training with actors and people in production so that we can get to an understanding of the discipline really required to produce a top-notch film or television production.”

Sharing his skills hasn’t been the only thing he’s been busy doing since returning to Nigeria, he’s also been spending some time in front of the camera, making his ‘Nollywood’ debut in 2010:

“The very first thing I did was a musical film called Inale. I then did a little film called Last Flight to Abuja and that was a really lovely little piece about the airline industry.”

Kae-Kazim describes why he feels passionate about supporting the film industry in Nigeria:

“I am very proud of ‘Nollywood’, in terms of what the people have done. They’ve put Nigeria on the map and they’ve done this without any support of any kind and I think they must be acknowledged. I think what has to happen now is that the industry has to expand, it has to get bigger and better. It’s really about upping the technical anti of the film [and] being able to tell stories that are very true to the African voice.”

Kae-Kazim tells the programme that in order for this to happen, more needs to be done to support the industry:

“No one is going to come and shoot there when the lights go off or when you need generators which are going to destroy your sound. That again is a lack of incentive to help build an industry which could be doing tremendous stuff for Nigeria.”

On why ‘Nollywood’ must continue to produce films and its’ potential to compete with the content being produced by the best in the industry, Kae-Kazim states:

“We have to start to tell these stories for ourselves, to me, that’s the most important thing. You know, I’m coming back from Hollywood, not to come and say, ‘Let’s bring Hollywood here’, but to really make ‘Nollywood’, Hollywood. To inspire the fact that we should be the stewards of our own stories. We have a myriad of different stories that we can tell that are all uniquely Nigerian on one level and uniquely African on another level.”

Kae-Kazim explains that part of supporting the industry would be to make cinemas more accessible in Nigeria:

“I think building more cinemas in and around Nigeria would certainly help… I would love to see more cinemas going up in places like Ajegunle and Surelere with affordable prices.”

He describes what he hopes to see from ‘Nollywood’ in the future:

“I want to see Nigeria as the hub of African filmmaking, not just concentrating on Nigerian films, but on films that tell you about the African voice from the African perspective.”

“Just keep loving what you do, but it’s really [down to] working hard, trying to improve not only yourself as an actor but the state of the industry. That also means [improving] the day to day discipline and making sure one is on time and focused when one is at work.”